Summer is arguably the most preferred period throughout the year. It allows individuals to get out and participate in an active lifestyle. The warm months experienced during summer allow individuals to travel and enjoy outdoor activities. Such as one of the most notable free summer events in Massachusetts in 2022 was The Revere Beach International Sand Sculpting Festival, which happened between July 22 and 24 in Boston. Massachusetts has always had a lot to offer to locals and people from other states during summer due to the wide array of events available. However, this event is different because it brings forward so many people from all over the world turning Boston into even more of a meltingpot.

Sand sculpturing can be explained as a form of art that utilizes sand as its main and only material to create art pieces. Individuals can use tap or seawater to compact the sand and give it the hardness required to create a sculpture. Sand sculptures should not be supported structurally by other materials. Sand sculpting festivals are done to exhibit the sculptures created using sand and are usually competitions. In 2022, the Revere Partnership at Revere Beach in Boston, Massachusetts, presented an international sand sculpting festival. It was one of the state’s largest free events, and more than 1 million people were projected to participate. The outdoor activity was open to individuals of all ages. According to Boston Central, “master sand sculptors come from all over the world to compete,” and the theme of the event was “Wonders of the World,” and it featured “beautiful sand sculptures designed by world-class sculptors, food trucks, and food vendors with cuisines from around the world, live entertainment, and a Saturday Night Fireworks Extravaganza!” The event had a panel of judges that decided on participants with the best sculptures, and a people’s choice award allowed “festival goers to vote on their favourite sculpture“.

The event was largely successful. It attracted 15 master sand sculptures globally, who made detailed works of art using sand. The artists were competing for $15,000 in total prizes. “$15,000 sounds great but it’s not for nothing!” said one 34-year-old man named George Easterly, a tourist from South Carolina who was visiting a friend. “I don’t know if I could sculpt enough to get $1!” and he was right. The competition was fierce and the skills unmatched.

Those competing were housed at the SpringHill Suites by Marriott Hotel near the beach. Some of those that live near the hotel spoke highly of the increased foot traffic. “The traffic is crazy and that can be…frustrating. But it’s nice to have the community come together. Plus, I don’t have to worry about parking so I guess I can’t complain whereas you guys visiting can’t say the same. I am surprised by the turnout though since it’s so hot.”

The historic heatwave throughout the country did not deter massive crowds from returning to the event despite the mid-90s weather. As a result of the blazing radiating sun at the beach, festival-goers were more cautious and chose to walk the Boulevard and see the artworks later in the afternoon and early evening hours. While the crowd estimates for the event are yet to be released by state police, Chris Pulia, a member of the executive director’s team of Revere Beach Partnership, said that “the crowds seemed comparable to previous years.” Thousands of people enjoyed the Saturday night fireworks. According to Pulia, the organizing committee felt that the festival was a “great event, and it was exciting to be back on Revere Beach and have a full-scale event, which it hasn’t been able to do since 2019.” No chaos was experienced during the event since the State Police performed exceptionally to ensure safety and order.

The festival is great for Boston and locals. It attracts crowds from all over the world, which boosts the city’s tourism and businesses. This is still happening despite Covid-19 still playing a heavy role in our lives as the chart below shows. 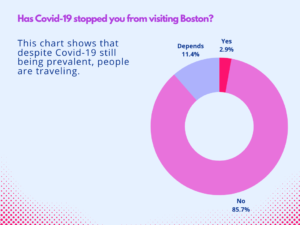 Since the festival is located about 5 miles north of Boston, it was an excellent getaway opportunity for locals. It also attracts more tourists in the future when some festival goers return to more festivals and other attractions the city has to offer. Sarah Kay Waycaster was a visitor I happened to meet at the festival. She happened to “stumble upon the event on Google.” saying that she wouldn’t have heard of it before but was so happy she saw the “niche” talents of so many.

The event’s coverage also boosts local, national, and international media tourism. The festival also illustrates the commitment of locals of Revere Beach to preserve it through the Revere Beach Partnership. It was also special because it was a celebration of the 125th anniversary of the beach, which was the first public beach in the country.

The Artists challenged each other in an attempt to create world-class art pieces from grains of sand. Despite that the artworks were all monumental, “The Devil is an Angel Too” by Abe Walterman won first place. Walterman is from Prince Edward Island, Canada, and deals with ephemeral mediums. He has been developing artworks from a young age. Melineige Beauregard, a sand sculptor, noted that judges look for certain attributes in a sand sculpture to decide the winner. She said, “In the ‘wow’ factor there’s a lot of things like how the pieces are carved, if there’s any technicality to it.” Festival goers chose Deb Barrett-Cutulle’s “Sky Shadows” for the People’s Choice Award. The second place went to Slavian Borecki’s “The Three Sisters.” Borecki’s work was also preferred by the sculptors. Hanneke Supply “I Am Nature” won third place, Bouke Atema’s “8pm” won fourth place, and Karen Fralich’s “Dinotopia” clinched fifth place.

Festival-goers praised the festival, and they had an exceptional experience. One onlooker noted about the sculptures: “It’s amazing, the craftsmanship, I have no idea how much time these things take, but they’re really incredible.” Another onlooker said, “The sculptures are amazing. I did not know you could create such with sand.” Another commented, “I have traveled all the way from New York, and I can say I am not disappointed. I would consider visiting the event next year too. Many festival-goers also loved the fireworks on Saturday. In addition, the ability to access the food and drinks on the beach made the festival goer’s experience smoother. Despite the high temperatures, the festival was a good experience for most goers from the local area and beyond.

Sand sculpturing is one of the best summer events, and one took place in Revere Beach, Boston, between July 22 and 24, 2021. The event involved several artists creating sand sculptures, and nearly a million attended. The winning artwork was “The Devil is an Angel Too” by Abe Walterman. The people preferred Deb Barrett-Cutulle’s “Sky Shadows.” The festival-goers had a good experience. They loved viewing the monumental artworks and enjoyed food, drinks, and fireworks at the festival. “I’ll definitely be coming back. It’s fun, easy, and entertaining.” says one Revere beach local before disappearing into the Ferris wheel line.

About Leila Smith 4 Articles
Hi, there! My name is Leila Smith. I’m a multimedia journalist currently based in Boston, Massachusetts. I am an enthusiast of all forms of storytelling, I have experience in print, online, radio, on-air, and video production. I’ve reported on a wide variety of topics but have a special interest in reporting on entertainment. Contact me: leila10smith@gmail.com leila_emerson.edu