Russian government is trying to control its Islamic community. It accepts only those Islamic organizations and leaders who proved their loyalty to the government’s power. The aim of the elite is to curb Islamic separatism that threatens the unity of the state. The Russian Muslims bear the stigma of being underdeveloped in comparison to other religious communities.

Islam is included in four traditional Russian religions. There are approximately 25 million Muslims in Russia according to the estimate by the Spiritual Administration of the Muslims of Russia. The 2002 estimated that the number of Muslims in Russia is equal to 14.5 million people which is 10% of the population. Ethnic groups that traditionally follow Islam are Tatars, Bashkirs, and others. 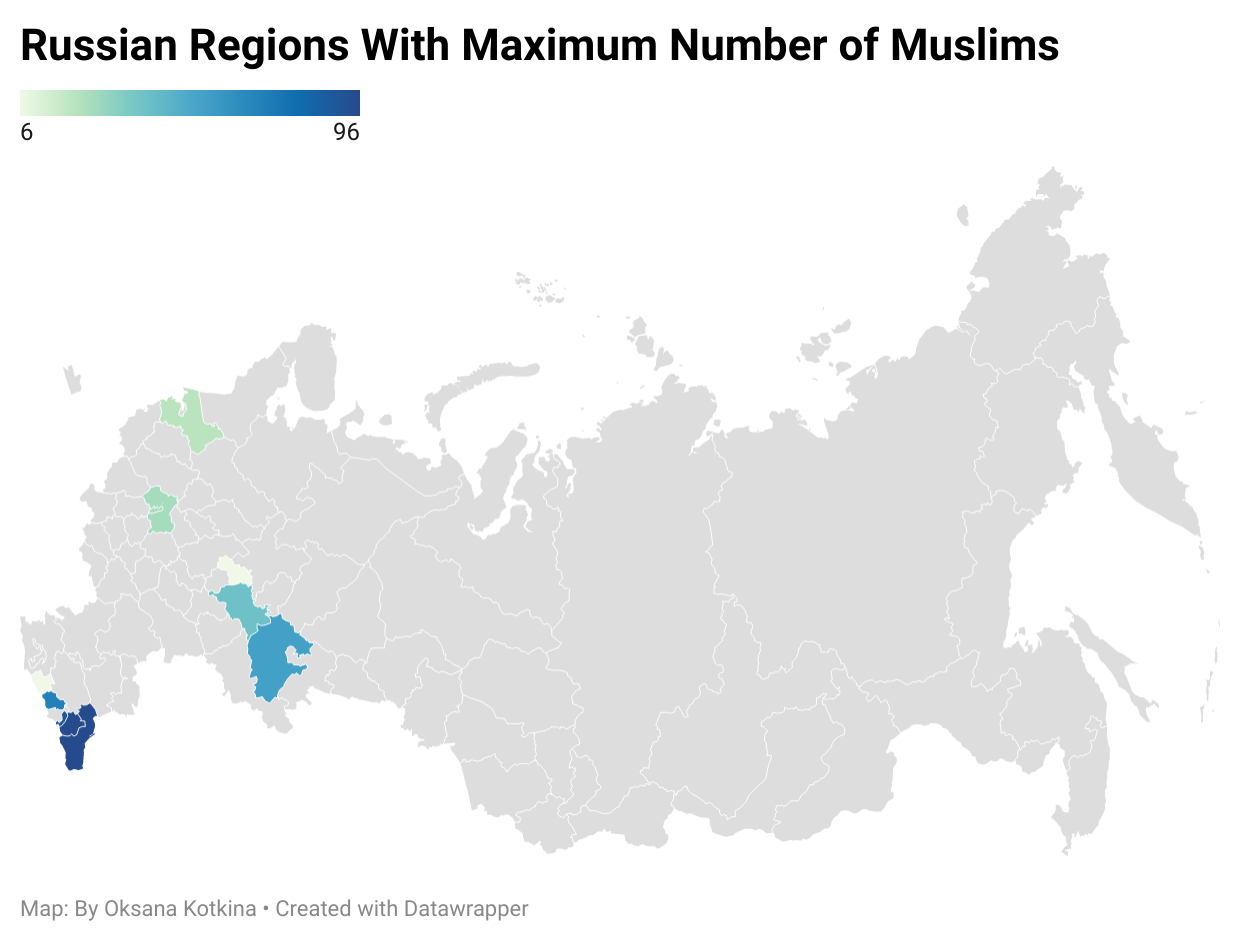 The Russian government needs official Islam to feel in control of the processes of the large part of the population of the country.

“Why does Russian state need official Islam? It needs to unify the community loyal to the power without extremists’ tendencies,” Danis Garaev says.

The main Islamic organization in Russia is the Spiritual Administration of Russia headed by Mufti Ravvil Gainutdin in Moscow. At the moment, a parallel structure to the Union of the Muftis of Russia at the moment seizes to exist.

There are several regional Muslim Spiritual Administrations. All of them represent Sunni Islam.

There is a developed system of Islamic education from higher education institutions to Islamic boarding schools – madrasah.

Even with these institutions Islam is still considered second-rate in comparison to Christianity.

“The exhibition of this museum is aimed at showing that Islam is an inalienable part of the Russian culture,” Ilnur Nizamiev the head of the Museum of Islamic culture in Kazan says.

“Part of the Islamic community of Russia traditionally feels underrepresented,”

— doctor at the University of Amsterdam Danis Garaev.

“Next year we are going to celebrate 1100 years of acceptance of Islam, but the celebrations are not going to be held in Moscow, but in Kazan,” Garaev continues.

Islam came to the territory of Russia before Orthodoxy. In 922, Islam became the religion of the powerful medieval kingdom Volzhskaya Bulgaria that was situated on the territory of the modern Volga Region, in the very heart of Russia, in 922, while Orthodoxy was accepted in 988 in Kiev, which is now the capital of modern Ukraine.

“With celebrating this date in Kazan, the government, as part of the Muslim community sees it, says, we accept you, but please do celebrate it somewhere father from the capital,” Garaev says. “The population of Kazan is about 1,5 million people and 750 thousands of them are Tatars, and in Moscow there are around 500 thousands of Tatars, plus there are the representatives of Central Asian republics,” he continues. “There are lots of Muslims living in Moscow too.”

The government underplays the role of Muslim community in Russia using the policy of religious tolerance that was developed by the government of the Russian Empire back in the 19th century. To some extent it helps the Muslim community to thrive, however, Russian Islam bears the stigma of being second-rate in comparison to Christians.

Centuries of forced Christianization followed the victory of the newly united Russian kingdoms under the power of Moscow, and not another Russian city of the time, over the remnants the Great Horde during the Great Stand on the Ugra River in AD 1480.

“Until the beginning of AD 18 the Russian tzars tried to baptize traditionally Muslim ethnic groups in Russia – Tatars and Bashkirs,” doctor at the University of Amsterdam Danis Garaev says.

“After attempts of their Christianization failed the government introduced the system of the spiritual administrations taken from Ottoman Empire,” he continues.

The times of the empress Catherine the Great marked the beginning of the new epoch of religious tolerance.

“There was the system of millet in the Ottoman Empire,” manager of government and interfaith relations in the Muslim Spiritual Administration of Russia Ilgizar Davletshin says. The millet system in Ottoman Empire was the system that allowed religious minorities and ethno-linguistic groups some self-governance and autonomy.

“At that time, it was a logical example to follow,” Danis Garaev says. “The Ottoman caliph was the head of all the Muslims, besides Tatars are ethnic Turks.”

In 19th century Russia, just as in the Ottoman Empire, the mosques were allowed to exist providing that the Muslims were paying a special tax and the number of mosques did not exceed the number of churches.

This period was followed by the Soviet times when all religions were suppressed.

“After the fall of the Soviet Union the Muslims of Russia had to re-invent Islam,”

“It works for all the religions in post-Soviet Russia,” Garaev says. “People who were not born and raised in a religious tradition had to re-create and re-invent it by studying.” And they were very different sources that influenced the new Russian Muslims.

Some sources claim that first publications of Islamic literature were sponsored by Saudi Arabia and Turkey. To this day, the Russian government fears the influence of those countries and their often quite radical interpretation of Islamic holy texts. Others say that Russian conservative Islam stems from post-Soviet system of thought.

“In Russian jihadi literature there are almost no references to the radical Islamic theology,” Danis Garaev notes. As an example of a curious mixture of Soviet and post-Soviet secular culture and newly found Islamic values and way of life Garaev brings Said Buryatski, a Russian-born ideologist of a terrorist group Caucasus Emirate, who found inspiration for his theological calls for jihad in the theory passionarity of the Russian historian Lev Gumilev. According to Buryatski, jihadi terrorists are the people with the high level of passionarity – an abundance of the life energy that makes the people able to make self-sacrifices to achieve a higher purpose.

“Even pre-revolutionary Islamic heritage in 1990s was read through Soviet culture and Soviet tradition of interpretation of Islamic culture,” —

Even using these very complex theories, Russian Muslims still bear the stigma of being less developed and less enlightened than other religious communities of the country. It is much known that they vigorously supported the great technological changes of the 19 century. At that time Tatar imams like Ismail Gasprinski created a Jadid movement. They prioritized secular science over traditional Quranic recitations. Around the same time Kazan published a magazine Syuyumbike that discussed that the position of women within Islam was not part of the Islamic teaching, but of the traditional culture.

“The Muslims of Russia living as a minority among the community speaking another language and practicing different culture voiced very progressive ideas that go in accordance even with the 21st century,” Nizamiev says.