On March 28, 2017, the trending hashtag #BlackWomenAtWork initiated a movement, allowing black women to come forward and speak on various cases of racism, prejudice and the microaggressions that they have experienced in the workplace. The hashtag took the Twitter world by storm, after then-Fox News host Bill O’Reilly inappropriately attacked U.S. Congresswoman Maxine Waters about her hair.

“I didn’t hear a word she said. I was looking at the James Brown wig,” said O’Reilly. He then continued to ask his producers to pull up an image of James Brown to make his comparison.

“In the black community, when any black woman excels regardless of the barriers placed before her, it is seen as a win for US. But for white America, a strong black woman in any kind of position of authority is seen as a threat and unfortunately, the method of attack for many pseudo-intellectuals is by degrading someone,” said Shaynah Ferreira, a local journalist.

Waters later responded to O’Reilly’s in a tweet stating: “I am a strong black woman. I cannot be intimidated.”

Shortly after O’Reilly’s remark surfaced on national networks and social media outlets, White House Press Secretary Sean Spicer took part in what many consider a humiliating exchange with another female of color. Spicer rudely requested April Ryan, a reporter for American Urban Radio Networks “not to shake her head” at him, while expressing her disapproval for his response to her.

“Maxine Waters is an educated black woman. She has built a career on trying to bring the country together with dignity and class. She has maintained a 37-year political career without one scandal. She’s accomplished what some could never do. She deserves nothing but respect and any white man who tries degrade or undermine her proves the point,” said Ferreira.

These two situations prompted educator and activist Brittany Packnett to create the hashtag #BlackWomenAtWork to express her frustration toward racial and gender inequality for women of color and the microaggressions they face, via social media. Packnett sent out a series of tweets before finally urging other black women to share their stories, using the hashtag.

“I think it symbolizes the good side of this coin, in that black women are no longer just accepting this as the cost of having to do business,” said novelist Kimerbly McLarin. “The fact that there was an immediate reaction to those incidents, a unified reaction, collective condemnation, I actually find it hopeful.”

Boston area residents felt the impact of O’Reilly and Spicer’s remarks as well, taking to Twitter to show the world that things like this continue to happen on a daily basis in the workplace.

Dr. Jennifer Okwerekwu is one of them. She tweeted a picture of her official Cambridge Health Alliance work badge saying, “Got a special tag that says Doctor  hopefully 2 minimize further confusion about my role #thisiswhatadoctorlookslike #BlackWomenAtWork.”

Dr. Okwerekwu explained what made her turn to social media to voice her opinion using this hashtag. 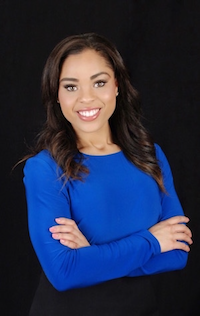