Many families of Alzheimer’s patients use music to care for their loved ones everyday and during the pandemic. Music often helps these patients revitalize their cognitive abilities.

“She couldn’t live alone anymore, it was becoming dangerous.” Marny Fappiano’s grandmother began to show signs of early onset dementia about five years ago. Living by herself, Fappiano says her grandmother gradually started to lose her independence because her memory was deteriorating.

“She was forgetting how to drive and how to get somewhere,” she says. On top of that, Fappiano’s grandmother would often forget to lock her front door and let in strangers. After taking her license away, Fappiano’s father decided to move his mother in with his family.

She lived in their home for a year and a half until her condition progressed. “We decided as a family that she needed to go into an assisted living home that specializes with Alzheimer’s,” says Fappiano, “So she’s been there for about a year now.”

Fappiano’s grandmother is one of the more than five million Americans who suffer from Alzheimer’s Disease or some form of dementia. As the sixth leading cause of death in the country, a majority of those diagnosed are over the age of 65. One in three seniors dies with some form of Alzheimer’s or dementia, according to the Alzheimer’s Association.

“Music is really important for that population,” says Audrey King, a board certified dance movement therapist and licensed mental health counselor. King conducts a lot of group therapy sessions for individuals suffering from various mental illnesses. This movement therapy, combined with the cohesive factor of music and rhythm, can grant group members a sense of belonging and identity.

Fappiano says her grandmother is in the earliest stage of Alzheimer’s because the disease has mostly affected her short-term memory. “She knows her birthday in 1933,” Fappiano says, “and then you could show a picture of my grandpa and she’ll be like ‘Oh yeah that’s Joe,” like, ‘that’s my husband.”

Fappiano has the same conversation with her grandmother every week about her job, school and living situation. Normally they comment on the weather, her breakfast or her appearance. Her grandmother cannot even remember her children’s or grandchildren’s names. Fappiano’s family uses music to help revitalize some of her long term memories.

“We literally have a playlist on Spotify for Gram’s songs and when we visit her, we play them.” The playlist has about eight songs on it and they originate mostly from the 40’s, 50’s, and 60’s. Once Fappiano’s grandmother recognizes this music, she instantly becomes more verbal.

King says this type of therapy becomes a full body experience for these patients. “They can lift their arms up, they can tap their feet,” and singing is embodied as well. People with Alzheimer’s especially benefit from this therapy because it helps with their speech patterns. “They can remember what they were doing when they heard certain music. They can be non verbal and then hear music and become verbal,” she says.

Around 16 million people provide unpaid healthcare for patients suffering from Alzheimer’s and dementia. These caregivers are estimated to complete 18.6 billion hours of care in 2020. While doctors and nurses are often recognized for their efforts, the work music therapists conduct is equally important especially at this time.

“Their job is to give out medicine, my job is to keep them engaged.” Alexia Lekos recently started working with dementia patients. She feels that music therapists deserve more recognition for their work during the Coronavirus Pandemic. “I think my job is still really important,” she says, “dementia doesn’t go away just because COVID is here.” Lekos works mostly to engage her patients in maintaining their verbal and motor skills.

“A lot of older people are very vulnerable to the virus, but they can also be the most difficult about it.” Lekos constantly has to reiterate the extra precautions her patients must take during the pandemic. “It’s really hard to explain to them the purpose of wearing a mask and they just get really mad at you.”

The therapist wants her clients to feel validated while she is also trying to protect them. Lexos says she practices a lot of patience in her position. “With dementia like, they just won’t remember,” she says, “It’s kind of like a balance to give and take.”

Annette Whitehead-Pleaux is an associate professor of music therapy at Berklee College of Music in Boston, Massachusetts. From talking with other music therapists, Whitehead-Pleaux mentioned that the mental health of people living in long term healthcare facilities are declining much faster than usual.

“They’re not able to interact with family and friends like they used to,” the professor states. These people are typically by themselves, or with one other person for months. “If they have dementia, or limited access to electronics,” Whitehead-Pleuax adds, “they might not be able to even FaceTime with people” or understand the concept of video calling.

Not only has COVID stalled group activities for residents, it has also made it extremely difficult for in-person visits; especially if cases have been reported within the facility. The residential home where Fappiano’s grandmother lives was not allowing visits for three months. The family resumed their song playing ritual once they finally saw her for the first time since March.

“When you put that music on, she knows every word and it’s the craziest thing,” Fappiano says, “Sometimes she’s even ahead of the lyrics and says it before it even comes which is awesome.”

Fappiano also thinks that the music helps her grandmother feel a sense of normalcy. “I think deep down she knows that something’s wrong with her head,” she says, “but when she hears that music, it’s like she almost feels normal because she knows the song.”

Corinne Pickett, a practicing music therapist, used to volunteer at a nursing home in high school. Her and her friends would play music for the residents who mostly suffered from some Alzheimer’s or dementia. While these residents had very limited mobility and struggled to hold a normal conversation, Pickett recalls the impact music had on their memory.

“It was the most incredible thing that I have ever experienced,” she says. Pickett would watch residents mouth the words to the songs word for word. “I just remember that being so powerful,” Pickett adds, “and I knew that there was something to music that could connect on such a deep level. More than just normal conversation could.”

Bryce Thomas recently graduated from Assumption University and is now planning on pursuing a career as a music therapist. She has seen the impact music has on Alzheimer’s patients from performing at a local nursing home.

“The more it became something that was every single week, the more I started to see such crazy responses.” Thomas usually plays older songs that the residents recognize. She recalls one instance where a male resident offered to help teach her a song.

“All of a sudden the nurse just started to sob,” Thomas says, “I guess this man had been completely nonverbal for six years and all of a sudden was talking.” This man apparently knew how to play the guitar when he was younger and his connection to music allowed him to become verbal. “It was that something in his brain to let him be able to speak because of the music,” Thomas says, “it was one of the most magical things that I’ve ever seen.”

In another instance, Thomas recalls a resident who started to mimic playing piano and change the song page. “This music made it so that he remembered that he could play piano and in his mind, he was sitting at the piano playing,” she says.

“Once the music is on, she starts swaying and dancing and just singing and she just gets into it.” Fappiano says her family benefits greatly from seeing their grandmother have her memory jogged. “We know that she’s losing it every day,” she says, “seeing that glimpse of her singing is so meaningful for us because it’s like now we have her back a little bit.”

Fappiano’s family even has a holiday playlist to which their grandmother also knows all the songs. “It’s just mind blowing how she can’t do many things, but she could remember those lyrics in that song and it brings her joy and ultimately brings my whole family joy.” 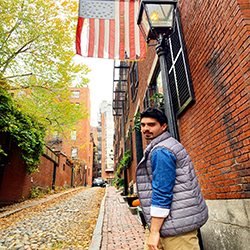