On a cold day in late February, activists gathered on Boston Common to make a last ditch effort to save Cape Wind. Environmentalists from the Better Future Project, who put together a petition, spoke about the need to reduce Massachusetts’ reliance on fossil fuels. Musicians performed and activists put on a sketch, telling the story of Cape Wind–what should have been America’s first offshore wind farm, brought down by an anti-Cape Wind activist group backed by the millionaires who summer in Cape Cod, like Bill Koch.

Cape Wind had been in the works for close to 15 years, ever since developer Jim Gordon announced the project. It had all its permits, but at the end of 2014, Gordon and Cape Wind failed to meet a crucial financing deadline. Massachusetts’ utility companies pulled out of their contracts to buy Cape Wind’s power, saying that the project failed to meet its contractual obligations.

The last to speak at the rally was Gordon himself, who vowed that the project was not dead. He said he was “inspired” by the outpouring of support, and spoke about the need for a diverse energy portfolio to insulate the state from the volatility its growing reliance on natural gas.

“We want to get our contracts reinstated,” he told the crowd, to cheers. “Stay tuned.” After the rally, Gordon told reporters he was hoping for an amicable solution and to avoid a lawsuit. 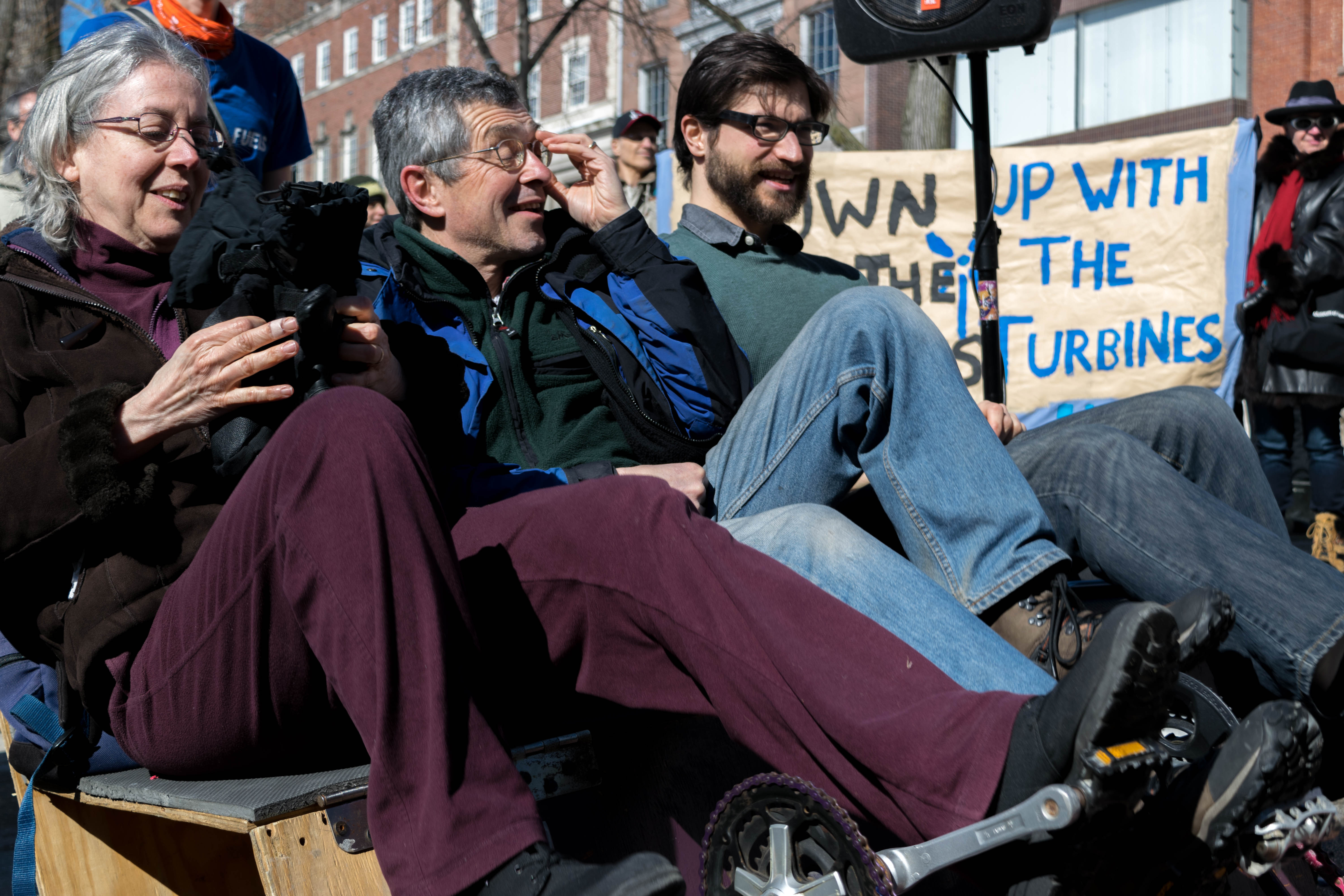 Attendees power the amplifiers with pedals 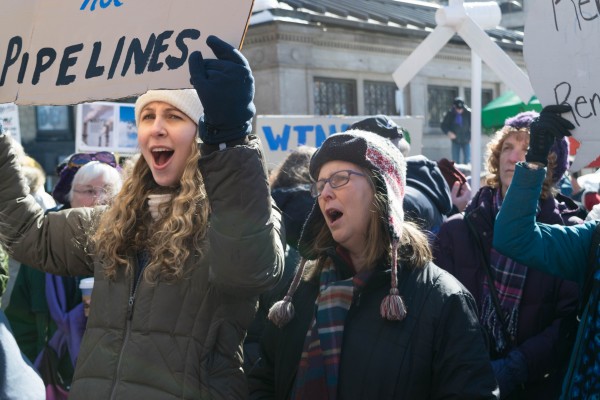 CapeWindRally-3
Supporters cheer at the rally 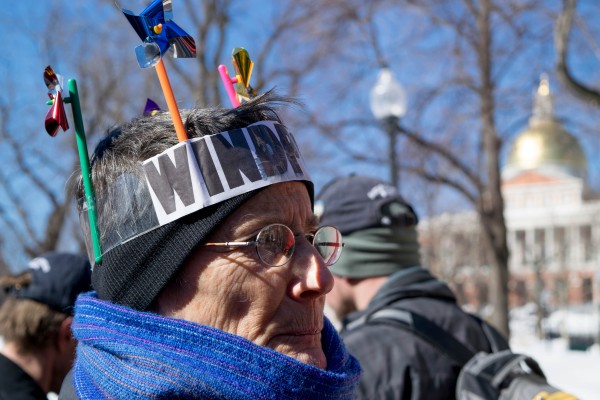 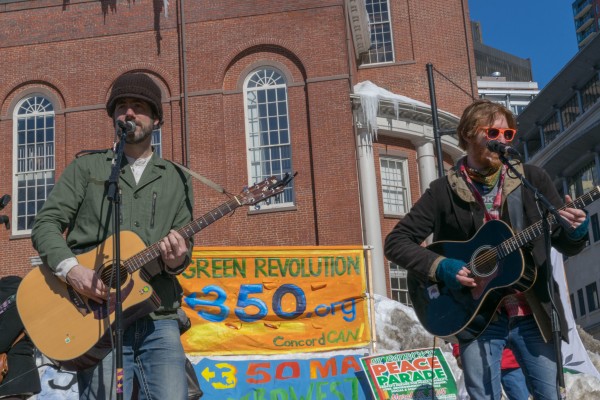 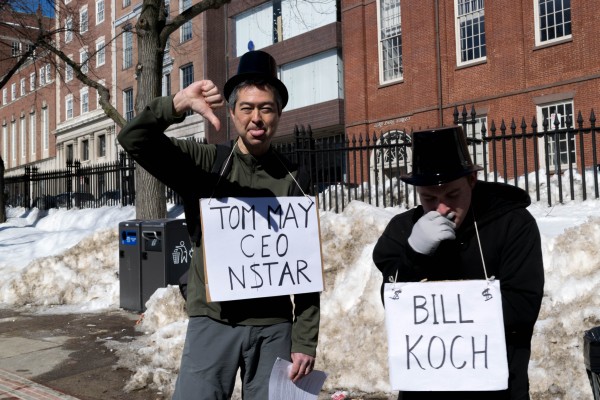 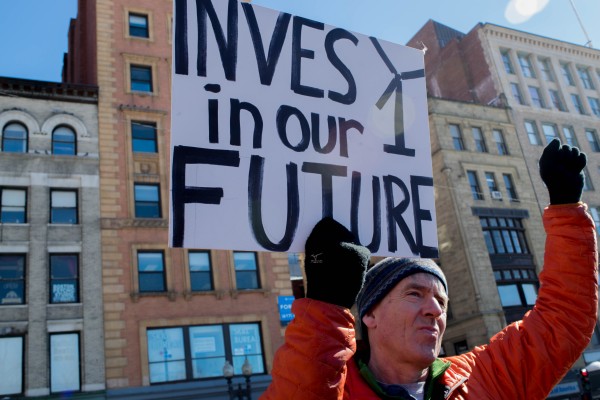 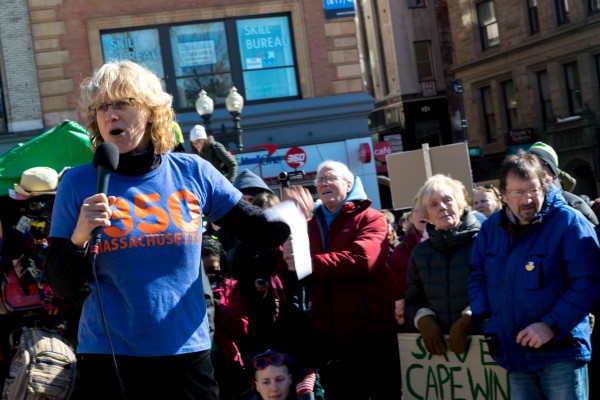 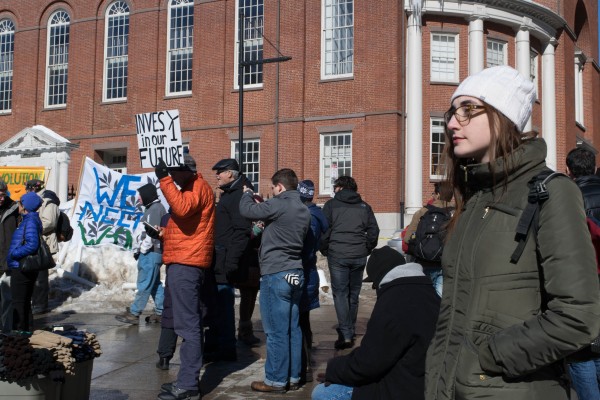 CapeWindRally-10
Alyssa Zimmer of the Better Future Project, one of the organizers of the event, watches 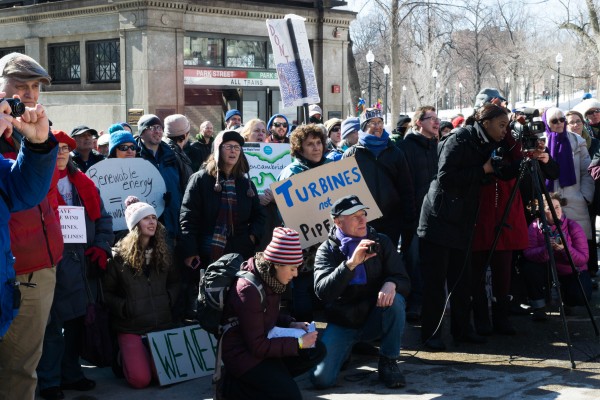 But just days before addressing environmentalists on the Common, Cape Wind terminated its lease with a terminal in New Bedford that has cost taxpayers $113 million. The terminal was designed as a staging area for Cape Wind. Without Cape Wind, the terminal is left looking for ways to recoup the taxpayer investment.

Despite the death of Cape Wind, New England will host America’s first offshore wind farm. Wind is a fast-growing part of the energy mix. In April, the Department of Energy released its Annual Energy Outlook, projecting what the future of energy will look like in the United States. The analysts looked at several economic possibilities and forecast that wind would grow regardless. (In the case of high economic growth, wind power could more than double.) In fact, the turbines are currently under construction.

Meanwhile, New Bedford, an economically depressed area, is undergoing the process to bring a casino to the waterfront.

Though it styled itself as such for years, Cape Wind will not be America’s first offshore wind farm. It faced significant opposition from the Alliance to Protect Nantucket Sound, which brought several lawsuits against the project. The group accused Cape Wind of everything from endangering birds and whales to promising manufacturing jobs and then turning to a German firm to make the turbines.

Supporters of Cape Wind, including Jim Gordon himself, accused the opposition of NIMBYism–not in my backyard. They didn’t want to support a project that might ruin the view from their summer mansions.

In a  Boston Globe piece in April, Audra Parker, the president of the Alliance to Protect Nantucket Sound, wrote that contrary to the popular belief of Cape Wind detractors as millionaires, opponents “came from all walks of life.”

Deepwater Wind won the lease for its Block Island Wind Farm in 2013. There was extensive stakeholder outreach from the start. “It really was a big collaborative effort,” said Stacey Tingley, a spokeswoman for Deepwater Wind.

America’s smallest state will play host to the first offshore wind farms in the country for a simple reason: the state government wanted it that way. It made offshore wind, and attracting offshore wind, a part of the state’s agenda. The company didn’t target Rhode Island specifically.

“That opened a window,” said Tingley.

The Block Island Wind Farm is much smaller than Cape Wind, though advances in technology mean it can generate a large amount of power. Its five turbines could generate 125,000 megawatt hours per year, potentially lowering the energy bills of Block Island by 4o percent a year.

It’s a pilot program, a demonstration project. But another wind farm, Deepwater One, is already being planned nearby, and Deepwater will be building off the shore of New Jersey and the west coast in the future. Deepwater One will provide New York and New England with power. The developers say the wind farms can be the start of something bigger.

Rhode Island’s success can be traced back to the Ocean Special Area Management Plan. Bob Darrow is a PhD candidate at the University of Massachusetts, Amherst. He’s a fellow at the  Integrative Graduate Education and Research Traineeship program, a multidisciplinary National Science Foundation-supported group that studies offshore wind. While many of the fellows study the engineering and environmental challenges, Darrow is in the political science department. He studies the politics and policy of renewable energy.

The Ocean SAMP is a state-run strategy for managing the waters of Rhode Island. It involves extensive scientific research and public input.

It’s the “gold standard” of how to do a project, Darrow said. It brought everyone to the table from the beginning, preventing a significant opposition from forming.

“Cape Wind was kind of the opposite,” he said, and there was “immediate blowback” and suspicion.

Cape Wind also had state support. The New Bedford terminal was an example. But “it’s not enough,” Darrow said.

The key lesson from Cape Wind, Darrow said: Involve the public from the beginning.

Former Gov. Deval Patrick was a vocal supporter of the project, as well as other renewable energy sources. Under his leadership, Massachusetts went through a solar boom. But Gov. Charlie Baker, who replaced Patrick just as Cape Wind imploded, has been less supportive.

Deepwater Wind, according to Tingley, went through a considerable effort to work with stakeholders. Numerous environmental groups support the project, including the Sierra Club, the Conservation Law Fund and the Natural Resources Defenses Fund.

Behind that is a “first of its kind agreement,” Tingley said. To protect the endangered North Atlantic Right whale, which migrates close to the construction site and is sensitive to noise, Deepwater Wind will hire trained marine mammal observers to be on site during construction. If they see a whale, they’ll shut down the operation.

“We take our role as responsible developers seriously,” Tingley said.

But Deepwater Wind also has a resistance group, Deepwater Resistance. Though it failed to respond to multiple attempts for comment for this story, its website accuses the Block Island Wind Farm of being “a financial disaster in the making.”

Tingley said the group never caused much of a problem, and the support far outstripped the concern.

In Massachusetts, by contrast, Darrow characterized the conflict between the Alliance to Protect Nantucket Sound and Cape Wind as “a fight to the death between Jim Gordon and Bill Koch.” If Rhode Island’s approach is the gold standard of how to build a wind farm, Darrow said, “Cape Wind is the great counter example.”

In Europe, the first offshore wind farm was built a quarter century ago, in 1990 in Denmark.  Wind farms exist today in Germany, Denmark and Spain, among other European countries. Offshore wind is a complicated business and it requires know-how. In Europe, companies today are familiar with the industry and are willing to invest.

Here, it’s still uncharted territory. “How do you convince the investors that wind is a good investment?” Darrow asked.

Strong federal subsidies could help wind be competitive and attractive to investors, but ultimately, private industry needs a willingness to invest.

“We haven’t gotten there yet,” said Darrow. “Hopefully, we will.” He added, “Block Island could create a momentum.”