Across the country, communities are turning to alternative ways to respond to mental health and behavioral crises. From the co-response method to alternative community peer specialist response, it’s clear that the current system of policing is being challenged as communities seek better outcomes when they call 911.

This year to date 1,065 individuals have been fatally shot by police, according to The Washington Post database which is updated regularly. One study by the Treatment Advocacy Center shows that those with untreated mental illness are 16 times more likely than other civilians to have a fatal encounter with police. 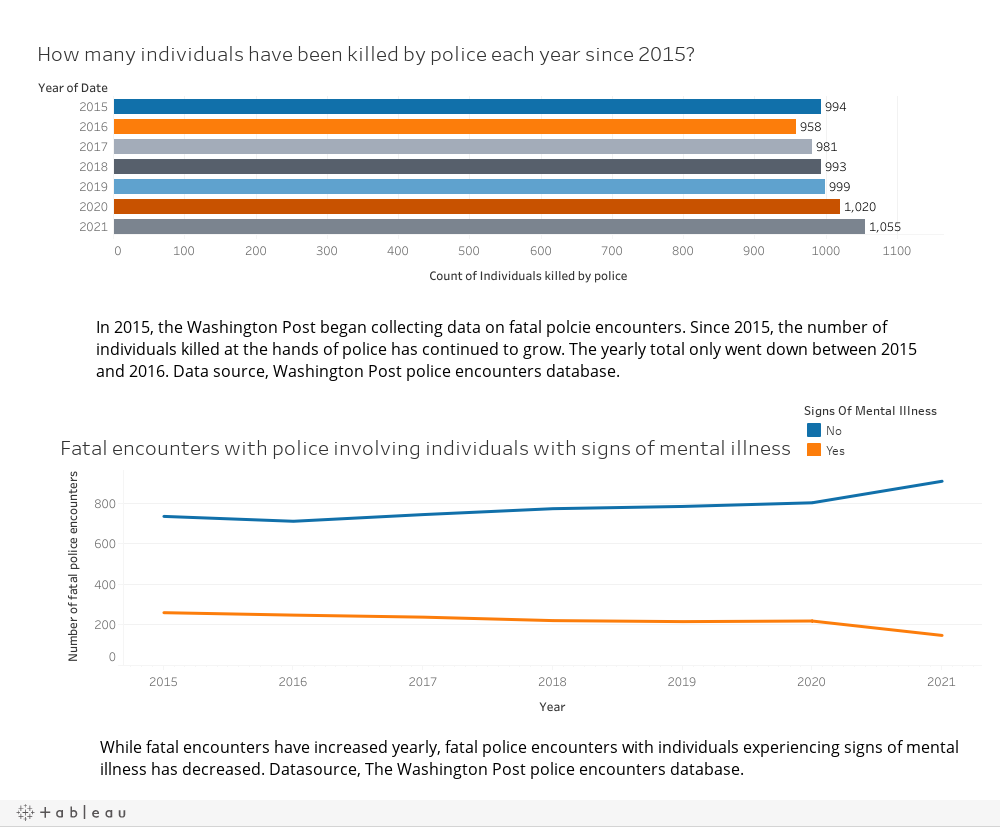 “The hope is that they are in that cruiser 90 percent of the time, riding around with officers going to all calls, it doesn’t have to just be mental health,” said Kallie Montagano, a former co-responder and now the program manager for Advocates’ Call Response Training and Technical Assistance Center. She said that it’s quicker to be able to respond if they’re already on the road with police.

Montagano was working as a co-responder one day when a suicidal call came in. She hopped into the cruiser with the police officers to head to the scene. They received word that there might be a domestic argument happening. There also might be a firearm. They arrived on the scene and saw children outside of the house.

“I ended up being the one to pull them further away and talk with them,” said Montagano. She was able to explain what was happening inside the house as a SWAT team surrounded it. Eventually the children’s mother came out and Montagano assured her that no one was going to get hurt. Their father was sent to the hospital and the day ended peacefully.

Now imagine what could have happened if Montagano wasn’t present.

Montagano has worked as a co-responder, and is now the program manager for their Call Response Training and Technical Assistance Center. She assists police departments, emergency response providers, and clinicians across the state who are interested in starting up a program. She conducts interviews and holds trainings on how the model works. She also helps instruct mental health first aid training for law enforcement and dispatchers.

Many police departments are hiring for co-responder positions as demand grows. “We definitely need clinicians. And I can’t say enough, this is the best job ever,” said Montagano.

While co-response has general support from the public, some advocates argue that it’s not enough or that it’s still too close to traditional police response. “It doesn’t solve the problem,” said Gewirtz, “because the problem in and of itself is police showing up at scenes where they’re not needed.”

Meanwhile in the Massachusetts legislature, the ACES bill could be passed to help fund programs that offer alternatives for community emergency services. “It felt much better to say we want your community to decide what you’re going to do, and we want to help you pay for it,” said the bill’s sponsor, State Rep. Lindsey Sabadosa of the First Hampshire district.

Rep. Sabadosa said the idea for the bill came many years ago while taking her daughter to swim team practice at the YMCA. There was another child having a “meltdown” which escalated to where the YMCA staff called the police.

Many cities and towns are already implementing co-response models, like Advocates, but that is not what the funding from the ACEs Act would be used for.

Sabadosa said they are taking a “very equity rooted approach in looking at the applications.” She said they are making sure the ideas aren’t ones embedded in the police, but will create something new to address the problem at hand.

Even if police respond using new crisis intervention training, it still could be triggering for an individual based on past experience.

“What they’re missing is that it doesn’t really matter. Because if someone else showed up at a different point in the same uniform and behaved in a different way, that has created a level of trauma,” said Sabadosa.

As individuals are often sent from service to service for help, the effort can be immense. “Humans would benefit from having a more human based approach to dealing with very human issues,” said Sabadosa.

Gwenhyfar Sadie was inspired by their own lived experience to join the new Cambridge HEART responder team. Growing up in poverty and having witnessed their family deal with unpleasant police encounters, they felt like they didn’t have the language to express how this made them feel until they went to college. They had the realization that the system wasn’t necessarily broken, they said, “It’s actually working perfectly, exactly how it’s supposed to be working.”

Cambridge HEART is the kind of alternative response model that could qualify for funding if the ACES bill is passed. Sadie has been in training since April 11 along with eight other responders-in-training. In their current day-to-day training, the group has trained to prepare to respond to situations of domestic violence, learned verbal and physical self-defense and practiced de-escalation techniques. Before all of this, the group completed an EMT course.

The HEART model was developed by The Black Response team over two years ago in response to concerns over public safety in the city of Cambridge. Sadie said they are teaming up with The Patch Network, an app created by a company called Raheem to manage dispatching. One HEART staff member will be in the office based out of the Democracy Center in Cambridge and will then relay information to responders through the Patch app.

The group has consulted with the notably successful CAHOOTS team started over 30 years ago in Eugene, Oregon. They were also visited by Mental Health First, based out of Sacramento, California.

Sadie said while they are an abolitionist, they don’t see the police going anywhere anytime soon. They said, “I think what becomes really important for me is that we are starting to build those alternatives. So we can establish that and be like, this works.”

A similar program in Denver, the Support Team Assisted Response, has proven that this model can be successful. According to Denver’s government website, STAR has responded to 2,294 calls. Not once have they had to call for police back-up with safety concerns.

The soft launch of the Cambridge HEART program is expected to happen in late fall of 2022. Other similar programs with or working towards community response as a police alternative in the state of Massachusetts include, the All Lynn Emergency Response Team (ALERT), Community Responders for Equity, Safety, & Service (CRESS ) in Amherst, Northampton Department of Community Care, Defund Somerville, Safe Medford, Malden Policing Alternatives & Accountability, and Uplift Watertown.

In July of 2021, the ALERT team in Lynn received $500 thousand as part of the city budget under former Lynn Mayor Tom McGee to fund an alternative community response team. With a new mayor in place, the future of the funding for the program is less clear. Regardless, the community seems ready for this type of police response alternative.

“So Lynn does have its own history when it comes to police brutality,” said Barbara O’Kenney, Outreach and Education Director for Diverse People United, a Lynn based social justice organization. In 2013 a military veteran named Denis Reynoso was killed in his home by police while experiencing signs of mental illness. The Lynn Racial Justice Coalition was created after the murder of George Floyd in 2020 and is comprised of seven local groups fighting for transformative justice.

O’Kenney said she has only heard of support for the ALERT team, especially as Lynn residents have realized that there isn’t an alternative to calling the police in mental and behavioral health crises.

“With the mental health worker responding, they can kind of take that time and space, make sure people are connected to community resources or the support they need, ensuring that they aren’t necessarily needing to be called again and again,” said O’Kenney.

“What’s propelling me towards the future is to really be able to see a lot more change, when it comes to the different sorts of systems and structures that we have in place,” said O’Kenney.  “So really trying to make sure that there’s more access for folks of color when it comes to mental health resources.”

In Chelsea, the community has found success with a different approach. Dan Cortez, community engagement specialist at the Chelsea Hub, said Chelsea, MA was the first city in the U.S. to launch the Hub model. This model could include police, social workers, teachers, medical professionals, and other community members who all come together to communicate about an individual’s needs.

“We’re not afraid to violate HIPAA when someone is at a high level of risk,” said Cortez. He said that HIPAA has “crippled communication” and people could be dying because information hasn’t been shared.

In late August the team will be celebrating 1,000 cases at the Chelsea Yacht Club. Cortez said that over the years the group has developed a “unique bond” and that they all have “The Hub mindset” now.

As communities across the country try out new models to address the need for better responses, one consistency is that police should not be the responders, or at least the sole responders to behavioral and mental health crisis calls.

“911 wasn’t meant to be a call to the police. It was for help. It was a public health line, really,” said Gewirtz. “So how can we balance things a little bit better, where calls about behavioral health crises, other non-violent situations can be responded to again, by people who can actually go to the scene and help?”