The 24-year-old Texas resident had just spent a few days hiking trails in California’s Yosemite National Park. She found herself quickly out of breath, she said, from simply walking along the rugged terrain. Realizing that her normal treadmill workout at the gym wasn’t working, she wanted to find something new that would make her stronger. That’s when she turned to CrossFit, a fast-paced, task-oriented workout. Redding said she was hooked from the beginning and found that she was always chatting about her newest fitness accomplishments.

“I realized that’s all that CrossFit people want to talk about,” she said of her idea to launch a blog chronicling her workout adventures. “It kind of takes over your whole life. I thought ‘Okay, I can’t annoy my boyfriend that much by talking about it all the time. I have to write it.’”

She started her blog, Maxout, soon after starting CrossFit. She isn’t the only one going from doing burpees to writing blog posts.

Extreme workouts like CrossFit are gaining popularity for those people looking for an alternative to traditional gyms. For many members, the sport doesn’t just offer a way to get stronger, but also offers a way to connect with others that running on a treadmill doesn’t provide. Some athletes turn towards the Internet to write about their own adventures and read about other’s CrossFit experiences, using blog comments and tweets to create a niche online community to further that team mentality.

“It seems that people can feel connected via blogs and the comments left on blogs because it allows for agreement, discourse, context and even having specific questions answered,” said Boston University social media professor Nicole Ames. “So, if you have access to an expert via a blog and other people who comment also demonstrate expertise, that information could be useful to you and perhaps even engaging.”

Redding continues to blog for a pretty simple reason.

“Online CrossFit bloggers or people who write make me feel like I’m not alone,” Redding explained. “There’s people out there doing this with me and in a positive way. Someone in Dallas may be doing the same thing as me, and they’re writing ‘I can’t feel my legs today.’ You can relate to that and it makes you feel like ‘Okay, I’m in the right place.’ It gives you motivation to keep going.”

Her year-old site is just one of the over eight million entries that pops up under the Google search keywords of “CrossFit blog.” Search results for CrossFit are similar to those for other popular, well-received workout classes like Zumba and spinning. These results have no doubt been boosted by the active CrossFit blogging community.

South Shore resident Tina Haupert had been chronicling her workouts on Carrots’N’Cake since 2008. After joining a CrossFit gym–referred to by regulars as a “box”–three years later, she found many of her posts featuring affective CrossFit gear or her best time on a daily workout (known as a WOD).

“it’s been awesome,” she says of her blogging. “Just having those relationships and having readership that wants to read about it and wants to interact and engage with it.”

Carrots’N’Cake has a large audience. More than 1.3 million readers check out her blog every month, Haupert said. She’s been able to use the blog as her full-time job, even using the blog’s platform to land a book deal. One of the most interesting partnerships she has is with Reebok’s FitFluential group, which looks to bloggers to serve as focus groups for new products.

Haupert recently used that partnership to take a trip to New York City as part of a Reebok-sponsored CrossFit group. She got to tour a new CrossFit box in the city and work out with several of the sport’s major athletes.

“It was like CrossFit heaven in NYC,” she laughed.

“Readers seem to respond to blogs that they can relate to,” Ames explained.  “It’s why there was such a surge in mommy blogging–because the topics covered are very relatable to women and even men in all stages of parenting. I think you can find niche communities in all sorts of blogging spheres.” 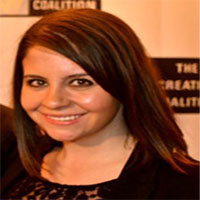