Many public artists find that their work can break down barriers and improve the lives of people within a community. Cambridge-based muralist David Fichter has found this to be the case in much of his work.

Louise Snipes had never celebrated her birthday. At least not until Fichter and his coworker bought her a cherry pie. Snipes, a Black women living in an elderly home in historically white Wayne, Michigan, became fast friends with the artists from out of town. They were painting a mural on the side of an old movie theater, but the residents of the elderly home watched them all day like daytime television.

One of the images in the mural was of a 16-year-old drum major in the high school band. The artists had come across his image while doing research for the section of mural about parades. They couldn’t track down the adult version of the teenager, who would have been in his sixties.

On evening at around 6 p.m., the crowd in the movie theater was letting out. A retired postal worker named Dave Raimer struck up a conversation with Fichter about the mural. Noticing the 16-foot-tall drum major on the wall, Raimer said, “Wait a second, that looks like me when I was a kid.”

Raimer and Snipes began visiting the mural regularly. “We used to call them our groupies,” Fichter laughed. The groupies’ reaction the mural was not always positive.

“Dave started to react to all of the African Americans,” Fichter said. He said that this wasn’t an accurate history of Wayne, not having a complete awareness of Wayne’s racially charged past, which saw them barring not only Blacks but Catholics and Jews from living there.

“[Dave and Louise], would get into arguments, and sort of work it out. I call it community therapy, because we were using the art to kind of work out some of the problems that people had,” Fichter said. “To me, that was the powerful experience of how community art can really represent in a positive way, because we didn’t want to show directly, all the negativity of the past, what we wanted to do was use it as a healing object.”

The final day of the project saw Fichter, his coworker, Raimer and Snipes eating cherry pie in the back of Raimer’s pickup truck together.

“I saw this [mural] as an opportunity to reweave the social fabric through art. To put it into a metaphor: put patches to create a quilt out of all these disparate elements that couldn’t easily reconcile,” Fichter said. “And in a lot of ways I think we were incredibly successful at doing that.”

Fichter has seen how public art projects effect communities in the Boston area as well. Every summer since 1996, he adds a new section on to a Mystic Ave. mural on the side of I-93 highway, which cuts that part of Somerville off from the Mystic River. The mural is nature themed, and its intent is to reconnect the water to the city. Fichter does not do this work alone, he employs 10 to 15 high school students, many of them from lower income backgrounds, who live in the housing projects nearby. 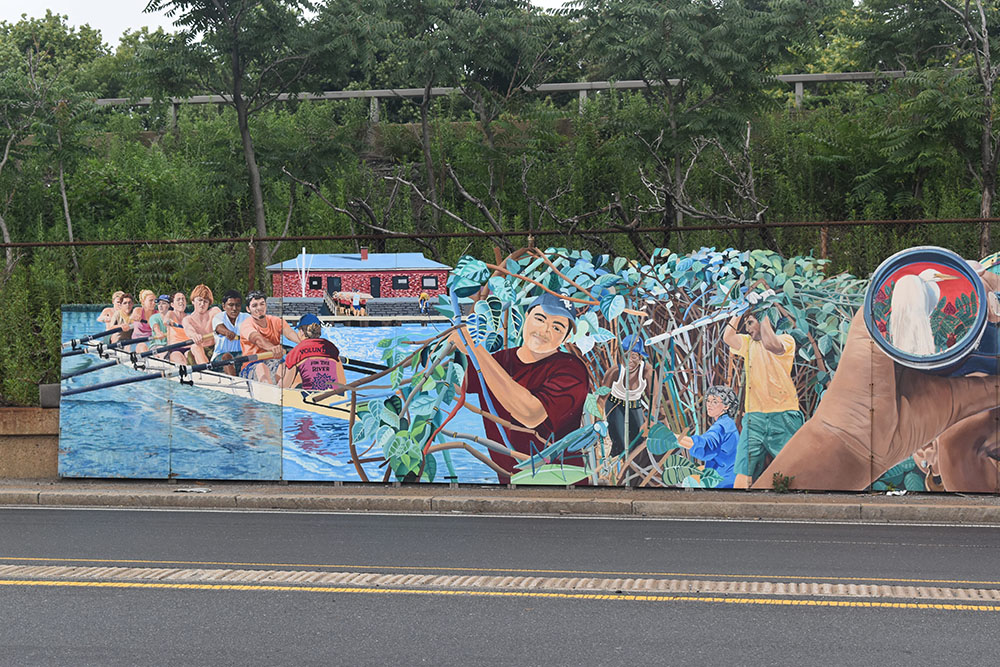 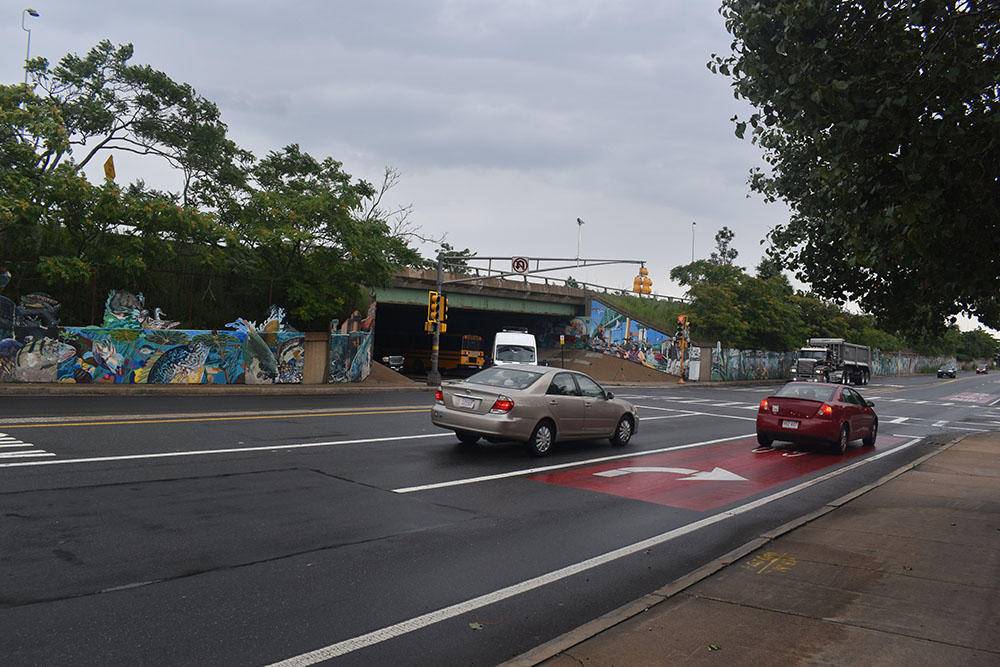 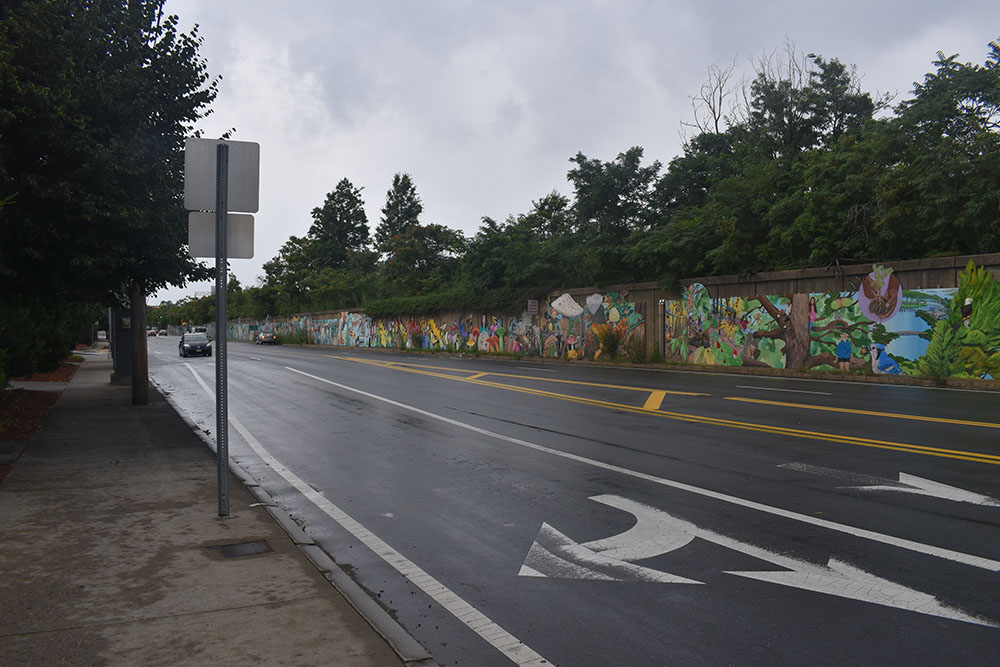 “These kids over the years that have been a part of it, and a lot of them have continued as artists, a lot of them have gone into environmental science and things like that, after they grew up and went away to college,” Fichter said.

Each year, the panel has a different theme, such as trees, climate change, fungi and fish. “That year we went fishing and whatever we caught ended up as an image in the mural,” he said.

For Fichter, the most important thing is the impact that it has on the teens in the community.

“They really learn a lot, too. They learn a lot about art skills, but they also learn about the natural world around them and its value and then they make something that people will see when they go by, because Mystic Avenue is a big commuter route,” he said.

The positive effects of public art on the children in a community is something that artist Joe Landry has noticed in his work as well. He worked with children in Turners Falls, Massachusetts, to create a youth sculpture park.

For Landry, the primary objective of public art in a community is more for the artists, in this case the children of Turners Falls, to get something out of it,

The relationship between art and community is something that both Fichter and Landry say they believe is essential to getting started in the world of public art.

In Boston, a public art curator organization called Now and There, that produces temporary and site-specific art, aims to help artists do just that.

Its Accelerator program, a six-month, 14-session cohort, provides the local artists who are selected with a stipend to fund their projects as well as an opportunity to learn skills that may be valuable to their careers.

“It’s an opportunity for them to learn from other artists in the region, from our executive director, and head curator,” spokeswoman Erin Sunderland said. “We hold different sessions to talk about things like budgeting and marketing, things that would be helpful to artists entering into the public art space. It’s for early to mid-career artists or someone who really hasn’t done any public art before.”

The growing popularity of public art means more and more of these projects will be available to artists trying to enter the field.

“Public art, especially murals have just become immensely more popular,” Fichter said. “I remember when I was first doing them, they were often seen as a negative thing, because people thought they would take down property values. And then because of the rising popularity of street art and things like that, now, a lot of cities are actually trying to bring them in and solicit them.”

Fichter said how public art is now seen as more positive influence on a city or town.

“The popularity is just risen so much that people have a different attitude. They’re now seen as something that can enhance a city and tell stories that people feel are important that aren’t told otherwise,” he said. “It’s a completely different world right now.”

About Peter Gordon 4 Articles
Peter Gordon is a recent graduate of Emerson College's masters program in journalism and a long-time resident of Boston. He is interested in stories about arts and culture, sports, and how policy surrounding housing, transportation, and use of urban space effects less privileged and underserved communities.