The United States’ population is living longer now than in past years. Baby boomers are categorized as people who were born from 1946 to 1964. They are now driving the growth in the senior population. By 2029, when all of the baby boomers will be 65 years and over, more than 20 percent of the total U.S. population will be over the age of 65, according to a report from U.S. Census Bureau.

This generation is forging a new path into later life. They are much more inclined to stay employed than previous generations, out of either necessity or desire. 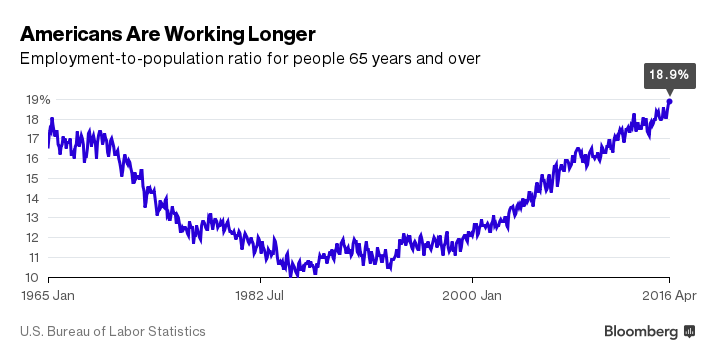 Why do seniors continue to work?

The U.S Bureau of Labor Statistics reports that, almost 20 percent of people over 65, the typical age for retirement, are now working.

Seniors can remain in the workforce because, as life expectancy in the U.S. has steadily risen over the past century, people live longer, healthier lives.

For most people who are over age 50 but under age 65, financial security presents the main reason for them to stay in jobs. They continue work in order to maintain family spending and to supplement inadequate pension.

Dargah Grujic, 52, had been a businessman before. “I had just turned 50 and my consultant business had dried up. I need a job because I am a single parent. I have a 12-year-old child to raise.”

For those who have enough pension and continue working after retirement age, the job can seem like a kind of life pursuit. They enjoy working and need the meaning, structure and life purpose that work provides.

Joan Cirillo is the president of the Operation A.B.L.E, a nonprofit organization in Boston. She is 65 years old, and has been working in the organization for 20 years. “I want to continue working because I feel excited about my job. I think I make a huge difference to the organization while working. The ability to serve more people and reach more people makes me feel energetic every day,” she said.

William Gyurina, 68, a retired respiratory-care therapist, just found a job at the Malden Public Library. As a widowed father of three grown sons, Gyurina said he started feel lonely at home. “I want to meet people and talk to people rather than staying home alone,” he said.

“There are several reasons that there are elderly workers in the labor force today compared with previous generations,” said Alicia H. Munnell, director of Boston College’s Center for Retirement Research, noting “…fewer have pensions. Some had their finances severely damaged during the recession. Also, people are living longer and healthier lives, and work is less physically demanding than it used to be.”

What kind of jobs are they finding?

In some fields, such as coaching or consulting, gray hair can be an asset. “You have to have experience in taking an organization through culture change, and that comes with a lot of time,” Cirillo said.

In some occupations, however, advanced age can raise questions about competency and legal liability. “For certain jobs that related to public safety — such as pilots, air traffic controllers, Congress mandates fixed retirement ages,” said Jacquelyn B. James, the director of Center on Aging & Work at Boston College.

Research by Matthew Rutledge, an economist at the Center for Retirement Research at Boston College, found that the kinds of jobs available to seniors narrow significantly. They are increasingly being funneled into what he describes as “old-person” jobs.

Rutledge also found out the patterns in the type of jobs that favor the older worker. “Our team used the database that classifies each job based on the kinds of skills it requires,” he said, adding, “and we found that the most popular work for older workers tended to require higher levels of dependability and outdoor work and lower levels of active learning, numerical ability and physical skills.”

Rutledge also noted that “what’s also important to remember is that the older workers in this employment data are the winners in the labor market. They’re the ones who managed to find work.” Rutledge added, “There are also so many elders who even cannot be workers even if they want to.”

About Yang Zhou 4 Articles
Yang Zhou is a multimedia journalism graduate student at Emerson College. She is interested in writing and reporting. And she enjoys listening to other's stories.