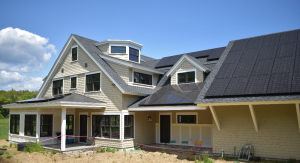 It’s 3,300 square-feet, Mason Browne’s new home, and it sits on its own drive, in a patch of conservation land. But the aspect that sets this brand-new structure apart from its neighbors are the 52 solar panels that sit atop the south side of the structure.

Mason Browne designed his Rockport, Massachusetts home as net-zero ready, a concept that may sound niche to many, but according to Browne is the future reality of home design.

The idea is that his home, like the self-reported 5,416 registered net-zero homes in North America, can create as much energy as it uses. It is connected to the energy grid, the system that we all rely on for our electricity that powers our homes daily. What makes net-zero is the concept of a home creating its own energy, like Browne’s solar panels, and storing that energy for power companies to use in addition to what they provide to that grid.

Mason Browne’s home, to be clear, is net-zero ready, this is a house that potentially will achieve net-zero energy over time. “It’s not net-zero yet. I will have to see after a year whether it has reached that point,” he said.

Every homeowner, advocacy group, politician and designer will have their own definition of net-zero as it relates to their own work. It is an inconsistency that makes all the difference when talking about net-zero energy and how it is accessible and affordable to everyone.

Browne determines that his home will be net-zero based on the amount of energy it will create and will use as it is used.

For someone like Todd Main, a construction contractor and homeowner, the definition may be different even if the project is the same. “Net zero is determined by the industry and by me to be completely off the grid by its energy use,” Main says. “It can be dependent on the grid from time to time because there is reciprocity for the energy that it uses and it gives.”

He and his company, Todd Main & Company have worked on multitudes of private homes, and commercial properties out of Beverley, Mass. His projects span across Greater Boston but most of his energy efficient homes are for affluent elder populations along the North Shore as final homes.

“My problem with it or what I see is only the wealthy can afford it around here and no one else seems to be doing it you know,” he says. “I think there needs to be more incentives, they need to be commensurate with the real costs to do it and they need to be clear. I mean go try to find out what incentives there are and how they change and what they really are because you need a Ph. D.”

Net-zero has its positives and negatives based, again, on the definition of a designer or a homeowner and their needs.

One of the aspects that is important to consider is how to power the home. Many homes that are net-zero are designed with solar in mind whether initially or in the future. Some will utilize small wood fire stoves for heating in the colder months. The choices are endless to the homeowner.

If solar energy is the route chosen solar installation companies will install the solar and take care of logistics such as permitting and zoning for the buyer. That is a large initial cost from the beginning.

“The most expensive aspect would definitely be the solar,” Browne says. “if you look at it pre-tax and pre-incentive. Meaning if the owner chooses to own their solar system than that will be a large upfront cost. Now that’s going to get mitigated through the tax rebates and some of the other incentive programs. If you’re going to have an alternative energy source than someone is going to have to pay for the solar system.”

It is all about the trade-offs.

There are the initial costs that become heady, but there are state incentives through programs like MassSave and even federal incentives for building net-zero energy homes but the money isn’t the only factor.

The design and orientation of the house makes all the difference for cost and for the energy usage.

“So, the first thing with net-zero is to try and orient your house properly,” Browne says. “To get as much natural sunlight and energy, if you are in a northern climate, it’s what you want to do. And then you want to cut way down on your energy demand. About 60 percent of your energy demand in this geography has to do with heating so you want to insulate heavily, and you want to reduce your electric loads. And so you reduce your electric loads by using energy star appliances and LED lighting so that’s the general strategy.”

The size of the house corresponds to the size of the solar system or the renewable energy features of the home. The energy efficient appliances used, and the utilization of natural lighting also lends itself to the cost and efficiency of the house.

So could this type of design lend itself to large housing developments such as affordable housing in Greater Boston.

Seth Federspiel of the City of Cambridge Net Zero Task Force explained that as housing structures go up in that region of Greater Boston the energy demand also increases. The amount of energy being utilized can’t be offset on-site so the city is looking to off-site renewables like community solar to help, but even that is still in the developing stages.

“Of course we know that not every building can be net-zero but every bit helps,” Seth said.

Net-zero is a goal, but not necessarily an applied form of design that works for every project. It is something to certainly strive for but takes good practice and much like any early form of innovation takes time before being fully utilized.

“It is possible to do two inches of installation [as an example] but it works as a unit,” Horowitz said. “Understand how the pieces are connected, you can’t just change one piece of the puzzle without considering each piece.”

About Chelsea Dickens 5 Articles
Chelsea is an up-and-coming journalist. Having recently graduated with her Masters from Emerson in College she now aspires to take on the broadcasting world from where she originally came prior to moving to Boston.