CENTRALIA, Pa. — Pennsylvania’s coal industry left many places in the state too hazardous for people to live in, but one town is turning that legacy of abandonment into an opportunity for life to bloom.

Laura Rinehimer gazes down Locust Avenue in Centralia, and sees a different street than the one she knew a few years ago. “In the past, if you were to walk down here, you would see trash everywhere,” said Rinehimer. “It’s really not like that right now.”

A town 60 miles southwest of Scranton, Centralia was mostly abandoned in 1962 after a coal seam caught fire under the town and has since turned into the surrounding area’s unofficial dumping ground.

Rinehimer is the environmental education coordinator of the Eastern Pennsylvania Coalition for Abandoned Mine Reclamation, or EPCAMR, which works to revitalize places in the region that have been scarred by leftover coal mines. She’s seen it all — dirty diapers, couches, toilets.

But she has a different vision for the town, which is still home to a handful of people. Rinehimer organized an event in April to plant 150 apple trees on Centralia’s land, and said she is hoping to turn the milkweed-rich town into a monarch butterfly migration waystation.

“Most of our big cities around here are on top of compromised land because of the coal mines,” said Shawnese Taylor, the GIS watershed specialist for EPCAMR.

In some towns like Swoyersville, 50 miles southwest of Centralia, huge leftover mounds of coal waste called comb piles blow soot all over the town and the people who live in it. In nearby Plaineville, water turned orange from iron oxide seeps from an underground mine into the Susquehanna River.

Those leaks create “deadzones” for aquatic life, said Rinehimer. She’s from Kingston, Pennsylvania, and isn’t happy that her state is known for these environmental disasters.

“We’re famous for having this orange water that smells like Sulphur,” she said. “It’s really embarrassing.” 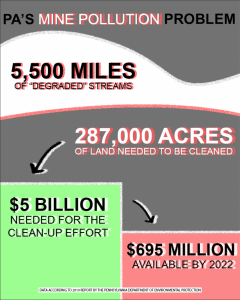 Though coal pollution covers a lot of land in Pennsylvania, Centralia’s issue is unique.

An anthracite coal seam was set on fire in the ’60s likely when the town landfill was set on fire to burn off the trash, according to the town website. The landfill sits on an old mine, and the fire worked its way into the earth, where it still burns today. Over the next two decades, townspeople left when efforts to drown and smother the fire failed.

The “ghost town,” as it’s often tagged became a spot for intrepid tourists, especially “graffiti highway,” a three-quarter-mile section of paved road that became covered in spray paint art over the years. The road was covered up with gravel by its private owners in 2020.

With the highway went a lot of visitors, said Rinehimer, and their discarded spray paint cans.

A year on, on a warm summer evening in June, Centralia doesn’t feel very ghostly. Cars pause at the town’s main junction as they make their way to the neighboring town of Ashland or Mt. Carmel. A group of girls emerges from the entrance to a hiking route on Route 61 South through town. The sky glows pink, and two men sit, chatting, on the open back of a pickup truck off of the main drag.

Rinehimer said she is optimistic about the changes she sees around town. EPCAMR has been holding trash clean-up days in Centralia for several years, and now five plots of apple trees are growing quickly on what used to be trash-filled, weed-covered land.

The abandoned mine reclamation organization and Harold aren’t the only interested parties in a clean Centralia. About 100 volunteers from around the area showed up to the tree planting day, said Rinehimer, with another 100 on a waiting list who weren’t allowed to attend because of COVID gathering size restrictions.

“The community is really excited about it,” said Rinehimer.

The organizers had set up an auger to dig holes for the trees, expecting to hold a second planting event later in the month, but so many people showed up that more holes needed to be dug out. Harold helped out with the auger.

“I had to run to plant my tree,” said Denise Hernandez, the outreach specialist at EPCAMR who helped run the event.

People who planted a tree dipped their fingerprints in paint and stamped them on a painting that’s currently sitting in Rinehimer’s mom’s house but will eventually be donated to a legion up the road where former Centralians gather.

Taylor surveyed the apple trees from the center of a plot where they have been planted in no particular pattern. Thick, green growth has bloomed around the young trees, and insects zoom busily between blooming flowers.

Once the trees grow a little taller, “it won’t look like a place where you feel comfortable bringing in a truckload of stuff,” she said.

“And the best part — we get apples for free.”

Rinehimer, Hernandez and Taylor tromp through the waist-high plants back to the sidewalk, where they turn to look at their work. More trees are coming, said Rinehimer.

“You know, it’s not some random place that you could just come and throw your trash,” she said.

“This is a place that people are still here taking care of.” 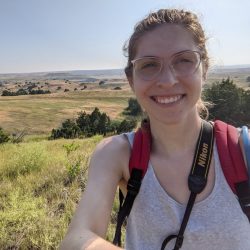