Muslim migrants to Russia come hoping to find the same country their parents and great parents were born into, a place where they were not complete aliens, but they face a totally different situation.

One of the migrants tells her story.

“I was born in Kyrgyzstan, in Bishkek. My name is Raya. It means heaven,” this short 18-year-old girl wearing a grey headscarf says. “I just came here to look around and to play,” she shares, while we are sipping coffee in the coffee shop she works in with her brother, providing for her mother waiting for her children in their rented apartment in Moscow and for her father back home in Kyrgyzstan.

Raya Japarova is one of the 6.3 million of migrants who came to Russia in 2020, according to the Ministry of Internal Affairs. This figure plummet compared to 12 mln in 2019. At that time, the UN also estimated that Russia received the fourth largest net number of migrants in the world for the period of 2010-2020 after the U.S., Germany, and Saudi Arabia.

“I think half of the Kyrgyzstan is here, in Russia,” Japarova says. “There are not enough job places in Kyrgyzstan, besides the wages here are higher,” she continues.

“The number of Muslims among those migrants who are coming in can be estimated as 50%-60%”, professor at the European University at Saint Petersburg Sergey Abashin estimates. “Most of them are coming from Central Asian countries – Uzbekistan, Tajikistan, Kyrgyzstan, and Kazakhstan.”

The number of Muslim migrants plummet in 2014 due to economy downfall. Crimea annexation reduced the value of Russian national currency to the U.S. dollar by 8%. Inflation reached 11,4% the Ministry of Economic Development of the Russian Federation estimates.

“Since the people are coming here to work, economy matters.”
— Sergey Abashin, professor at the European University at Saint Petersburg

“I don’t speak Russian very well,” Japarova says. “We still have some Russian schools in Kyrgyzstan,’ she adds, noting that she herself didn’t go to a Russian school, and she only had one class of the Russian language per week, but as she also had a lot of Russian friends, she learned to speak Russian.

“One must remember that the countries of Central Asia were part of the Soviet Union,” says Sergey Abashin, professor at the European University at Saint Petersburg. “There is still a Russian community there.”

“We have phones now,” Japarova giggles. All my Instagram subscriptions are from Russia. I watch Russian films,” she says. “Russian is not very hard”, she concludes, noting that she is also learning Turkish, as her family hopes to open a small business selling Turkish goods in Kyrgyzstan.

“A lot of people from Central Asian countries can speak Russian,” Sergey Abashin says. “They watch Russian TV stations. They are minimally integrated into Russian culture already back home.” 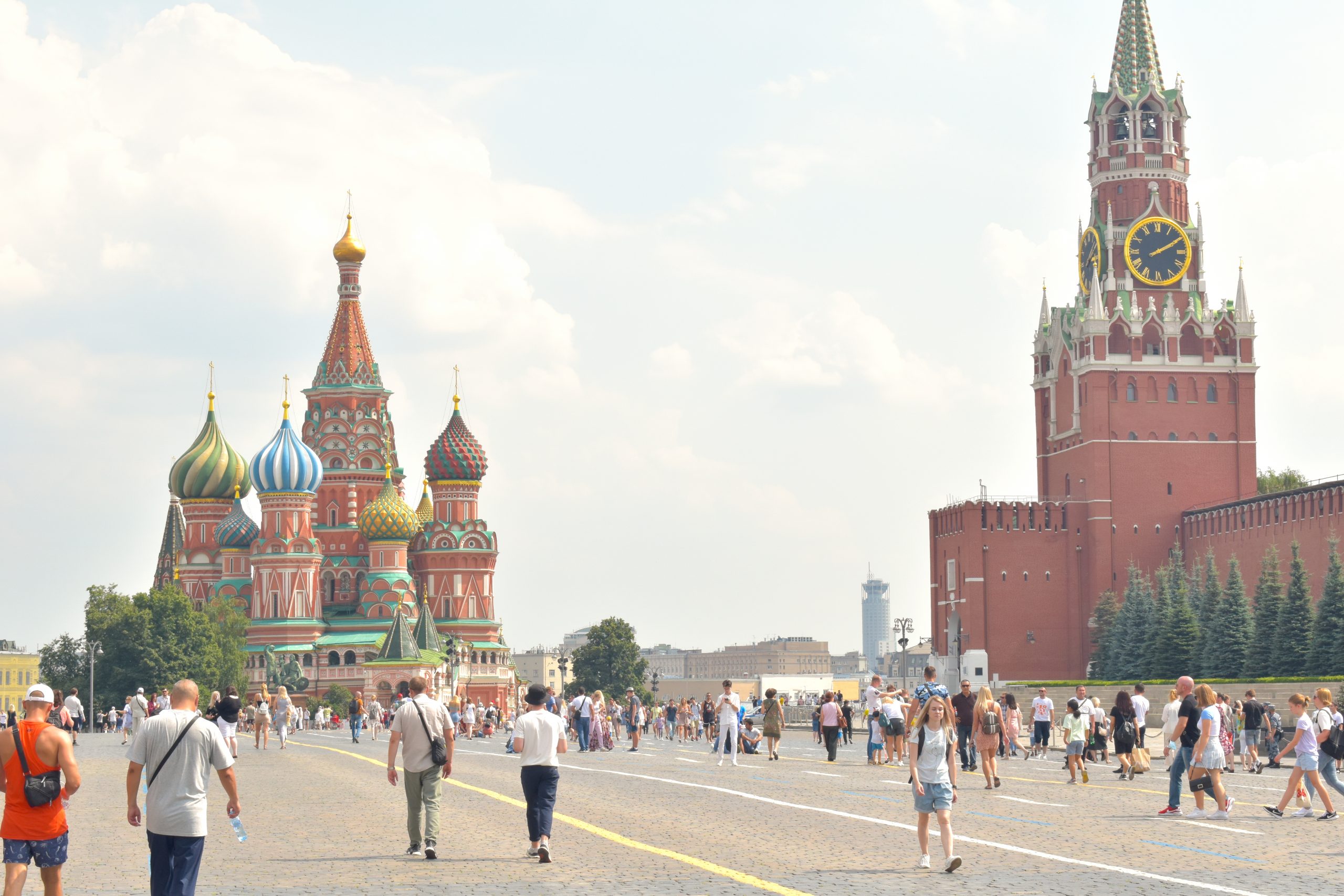 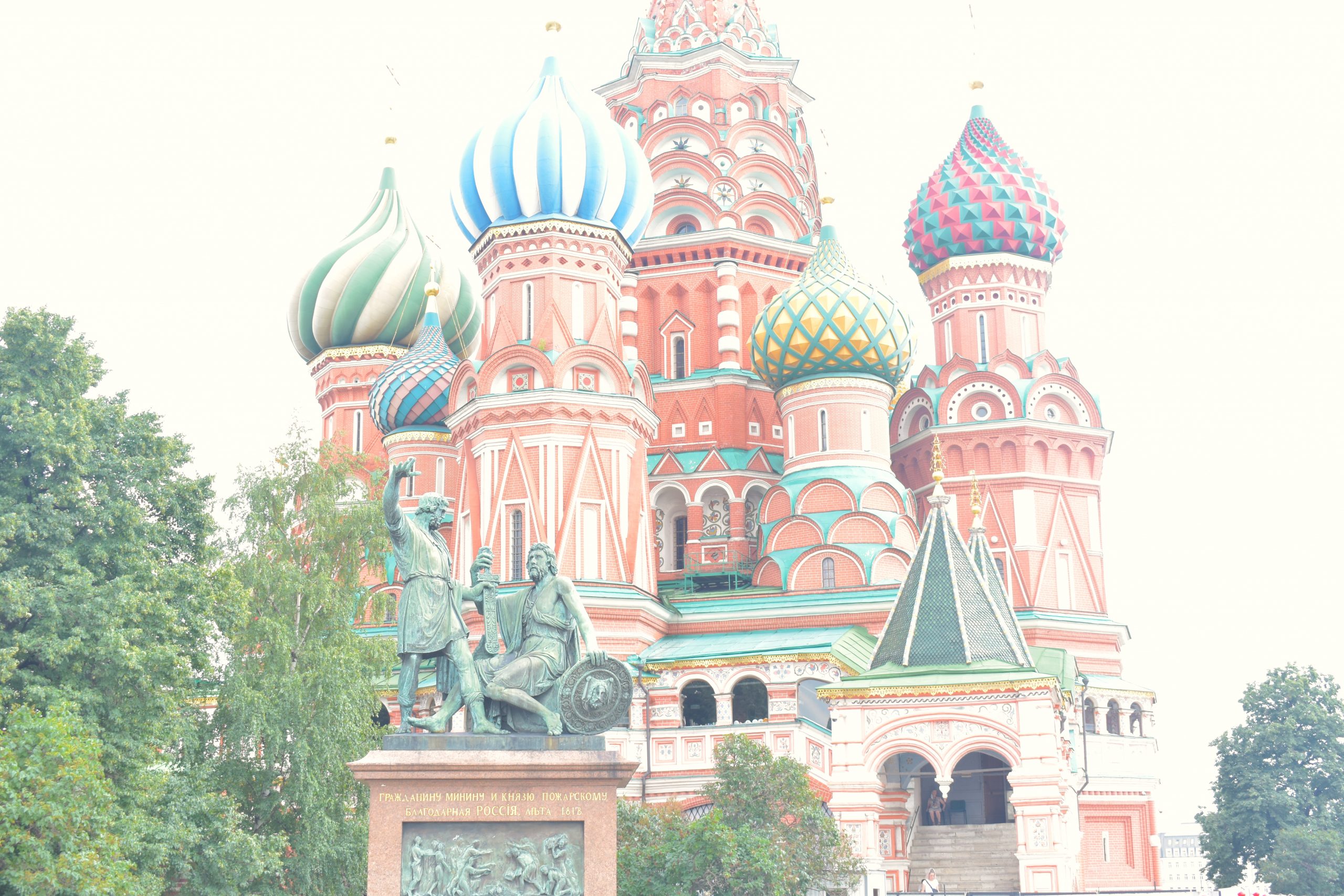 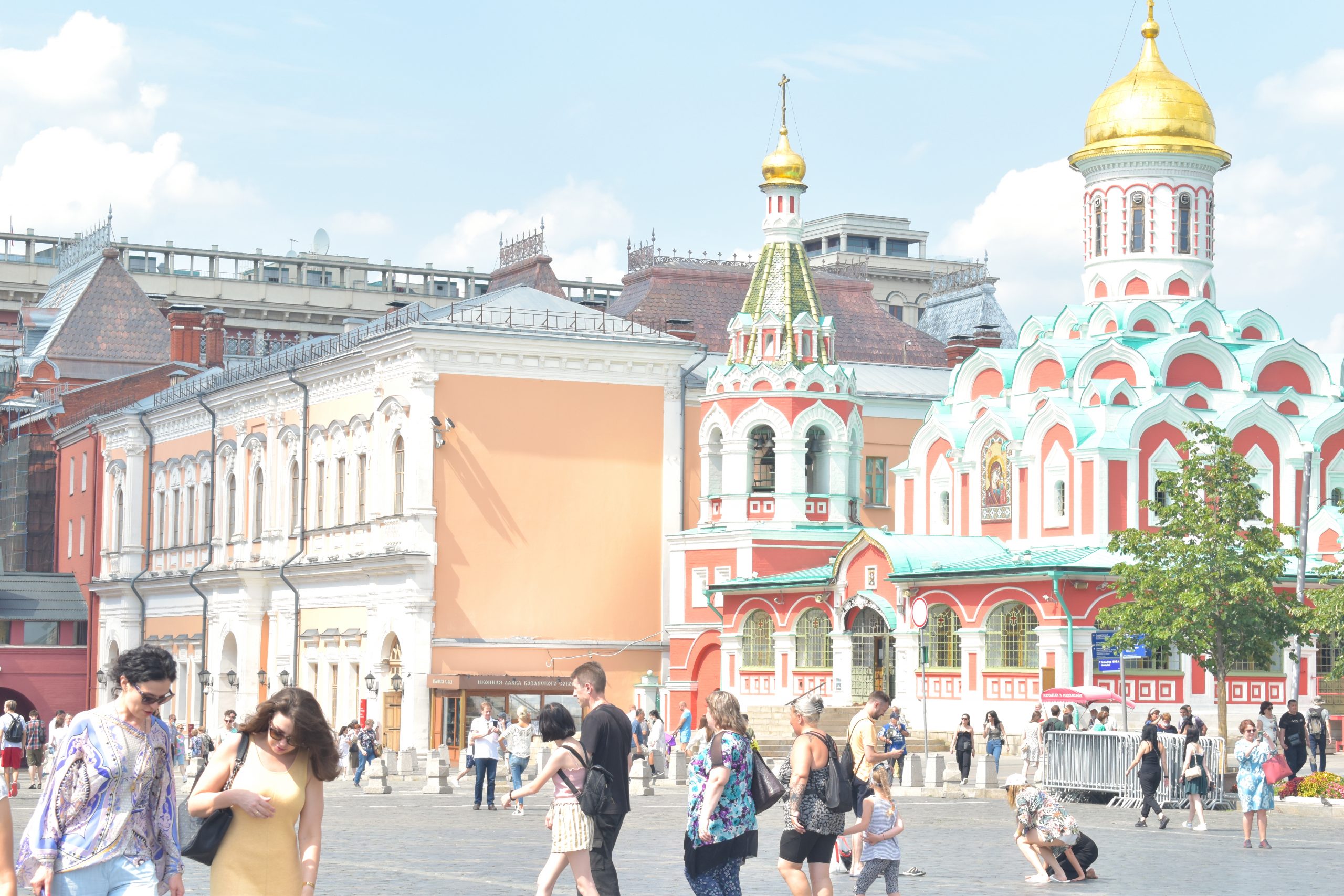 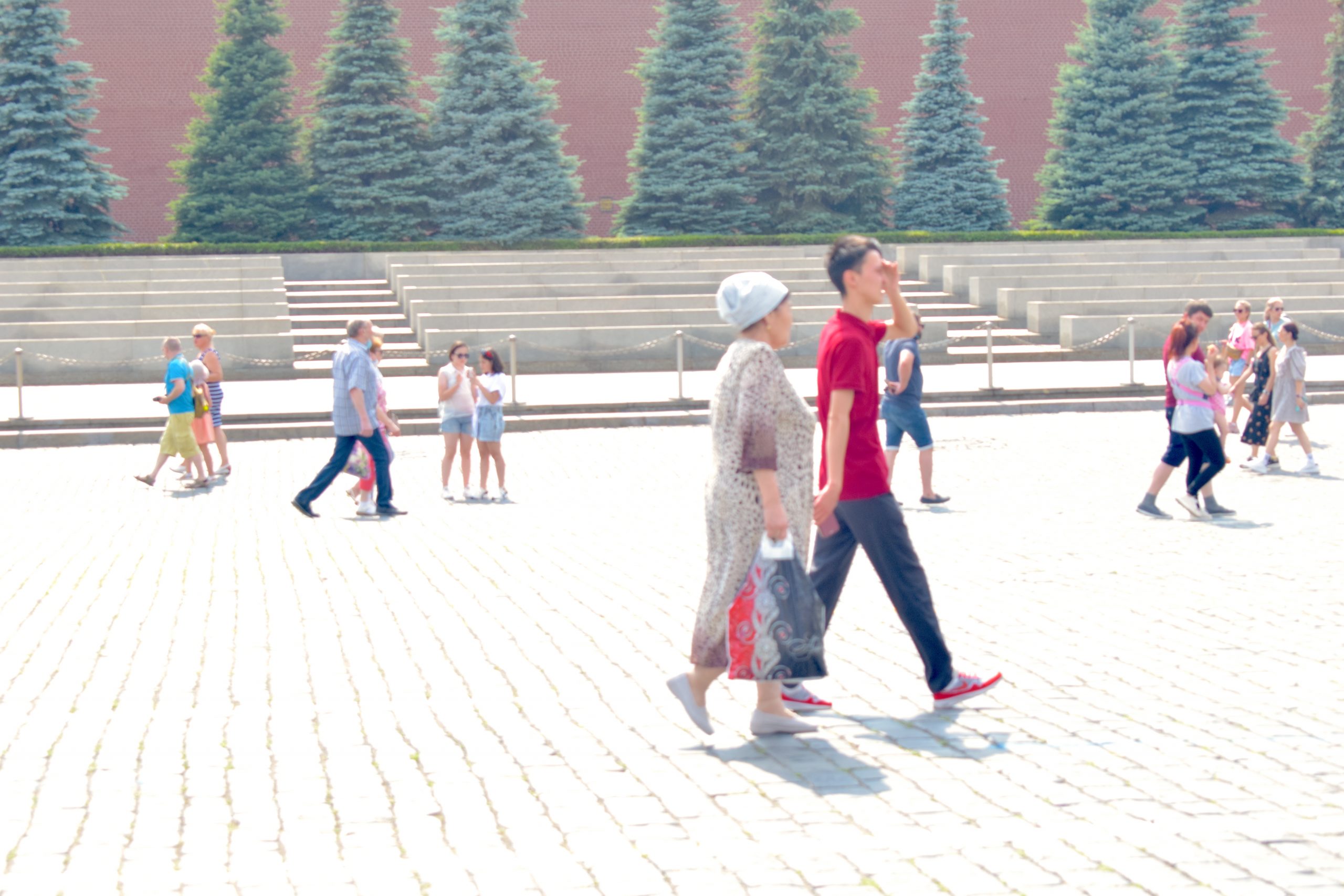 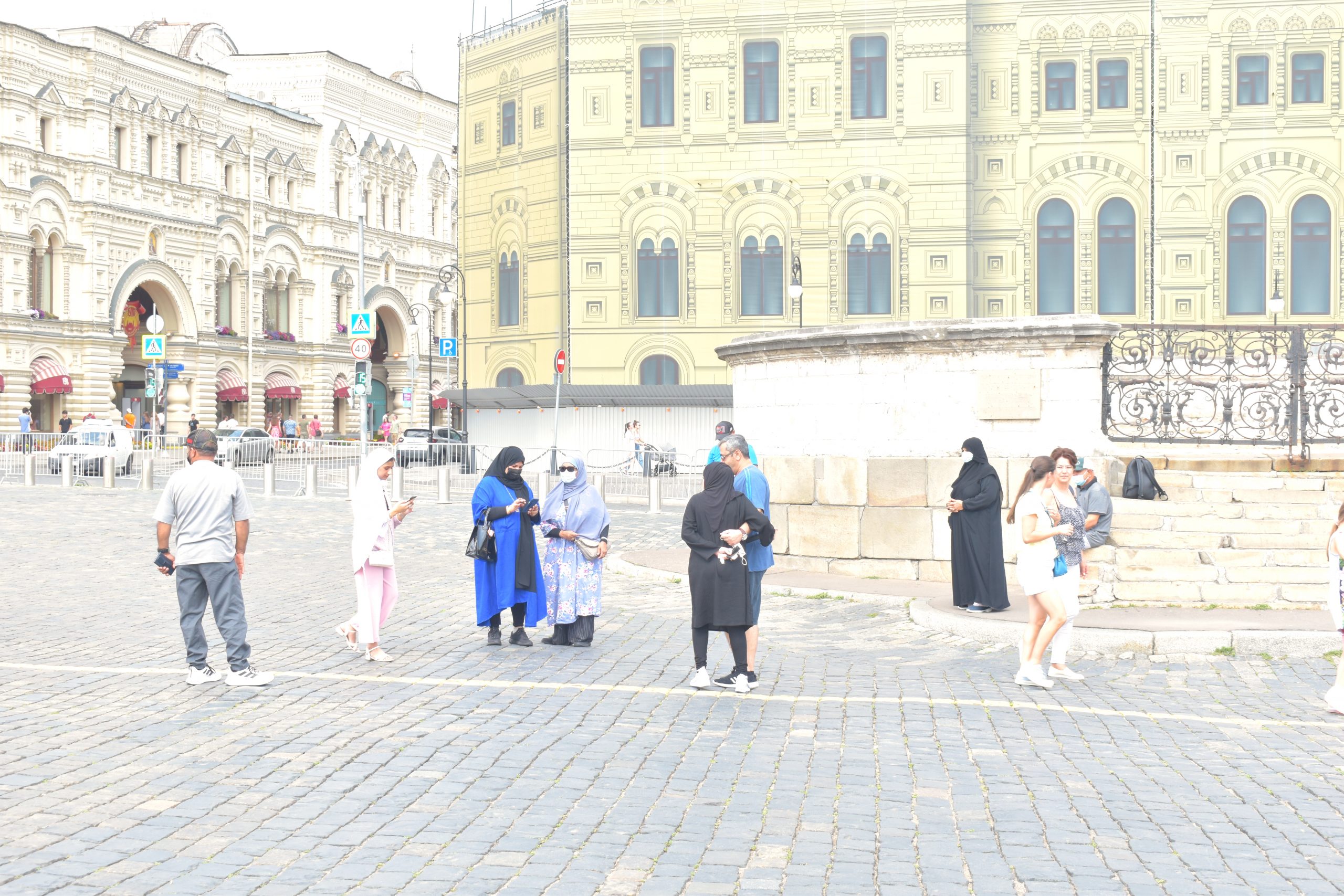 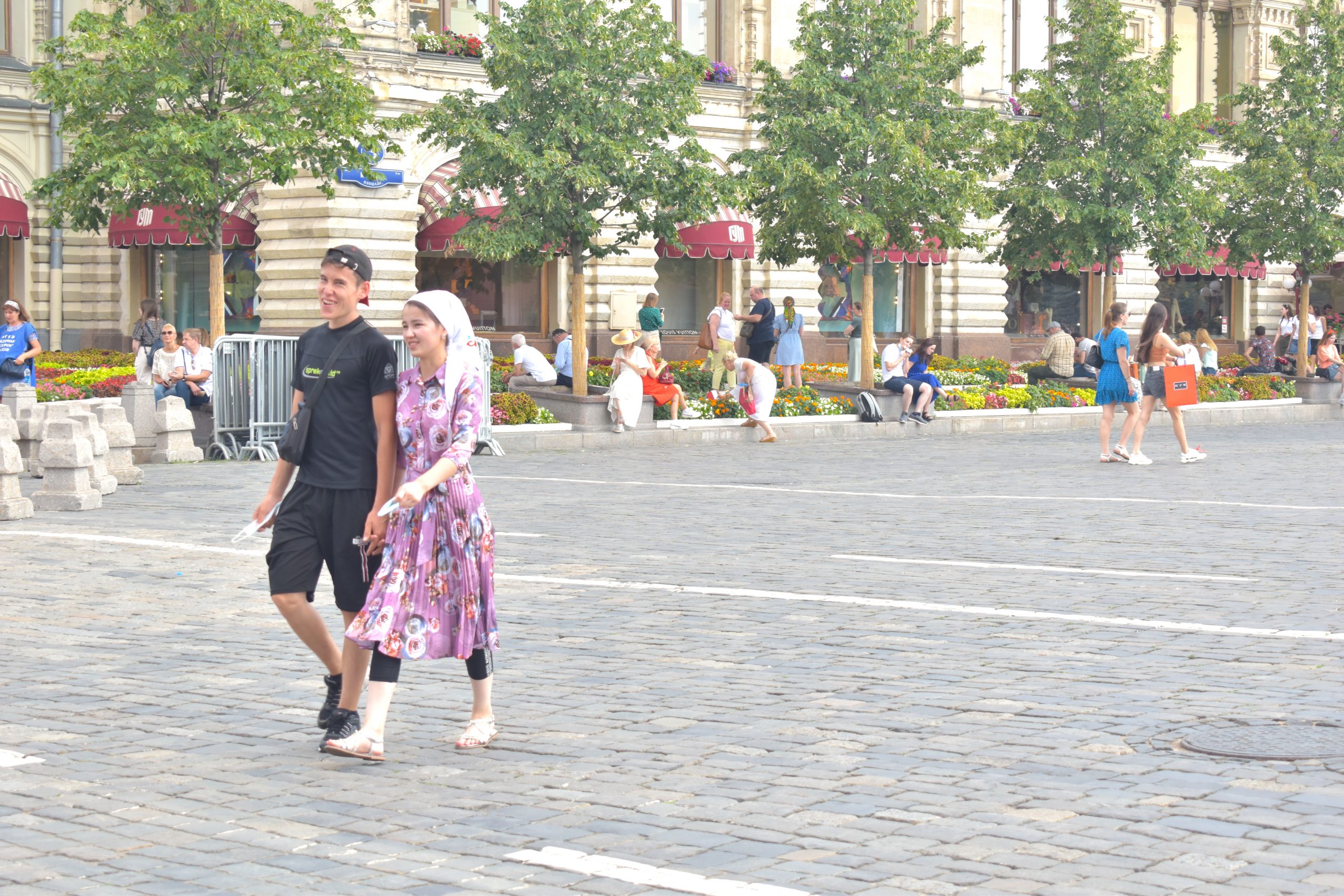 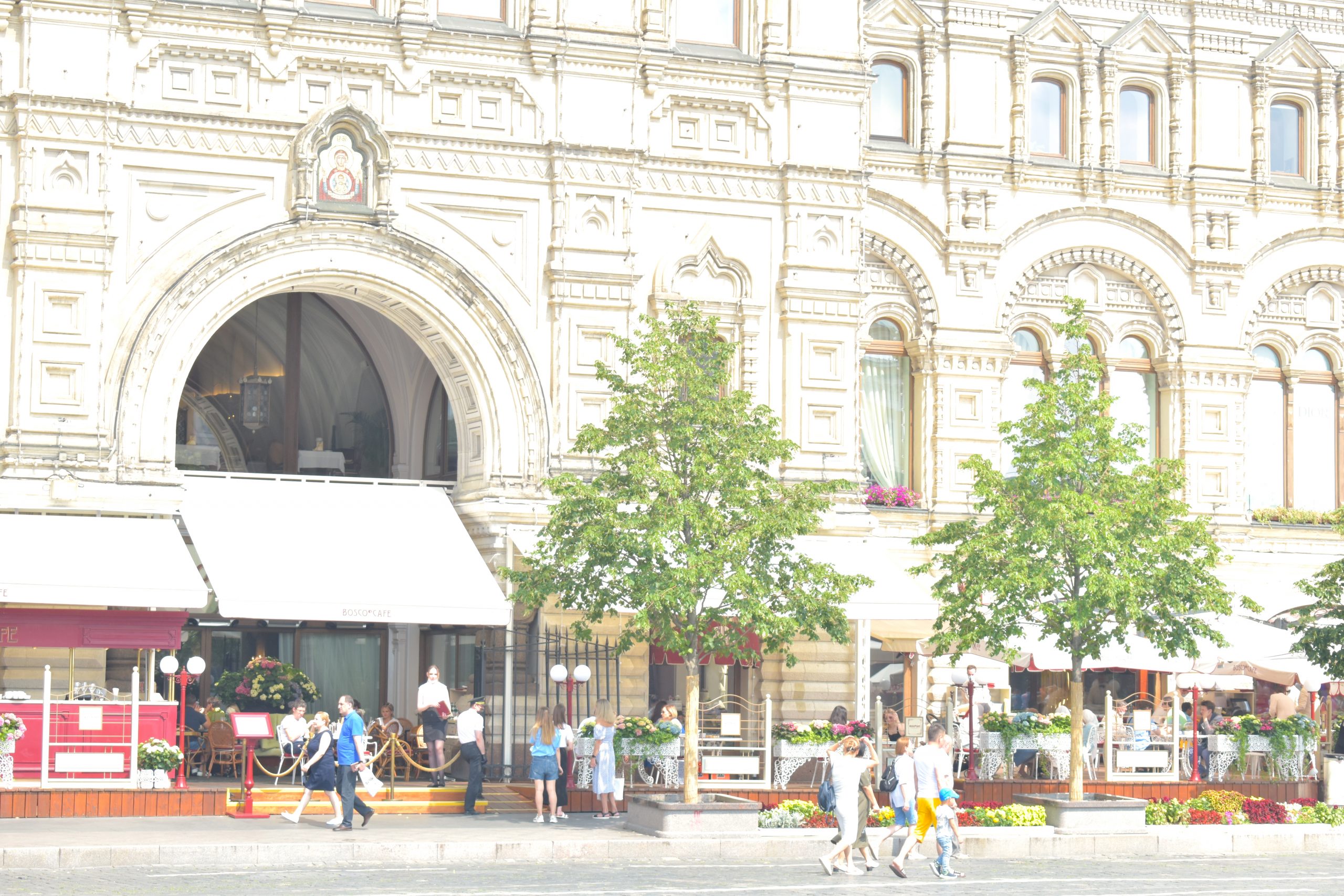 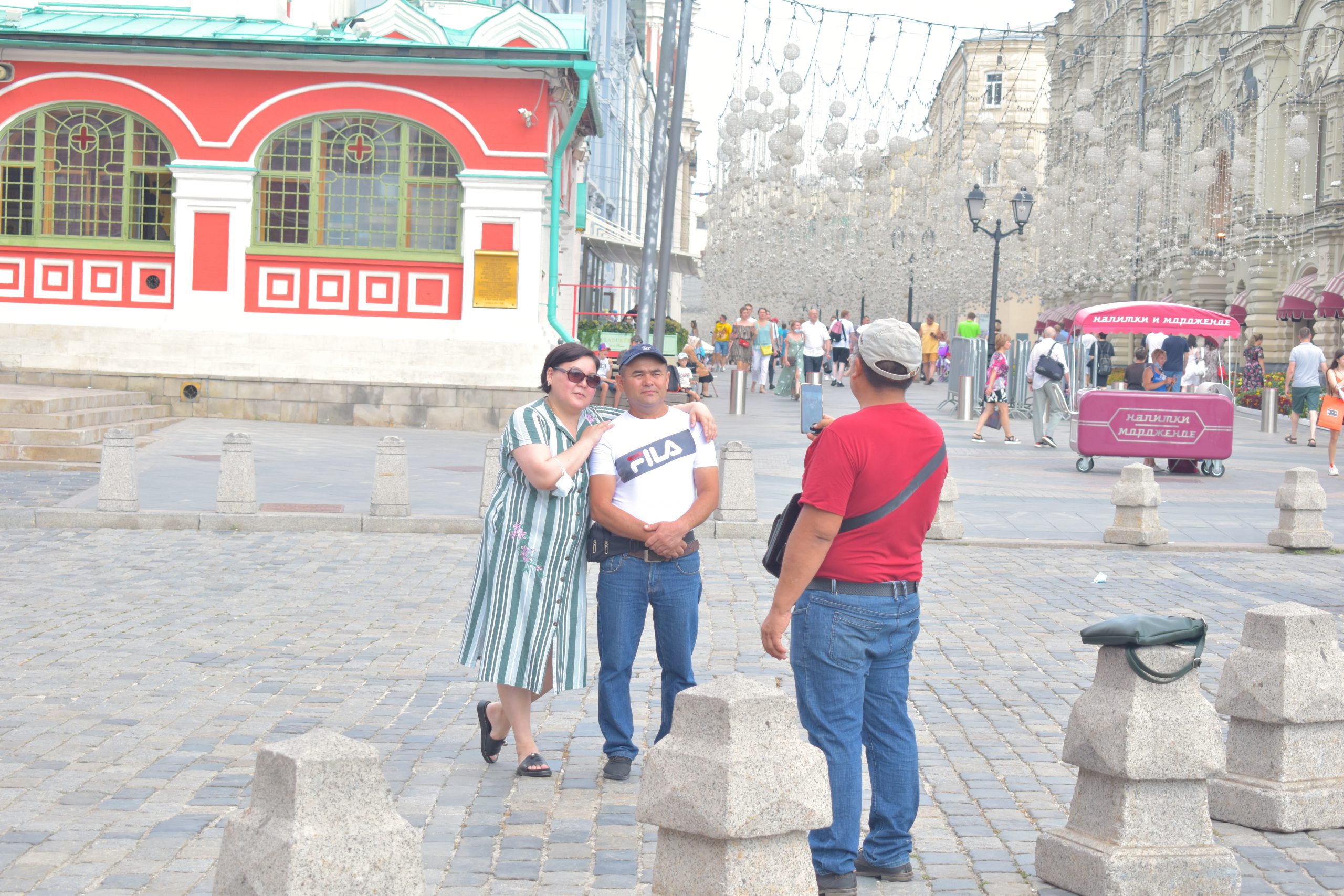 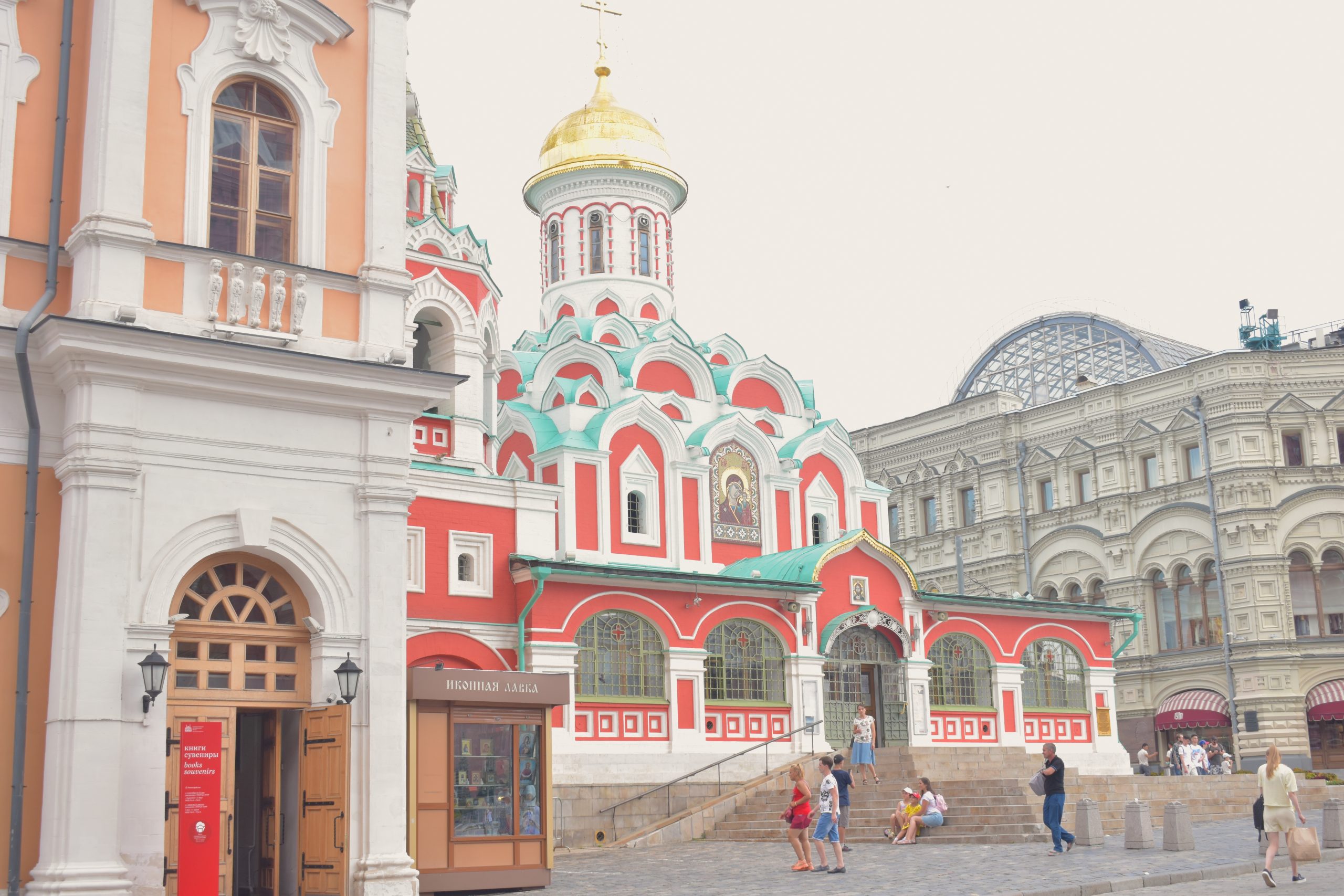 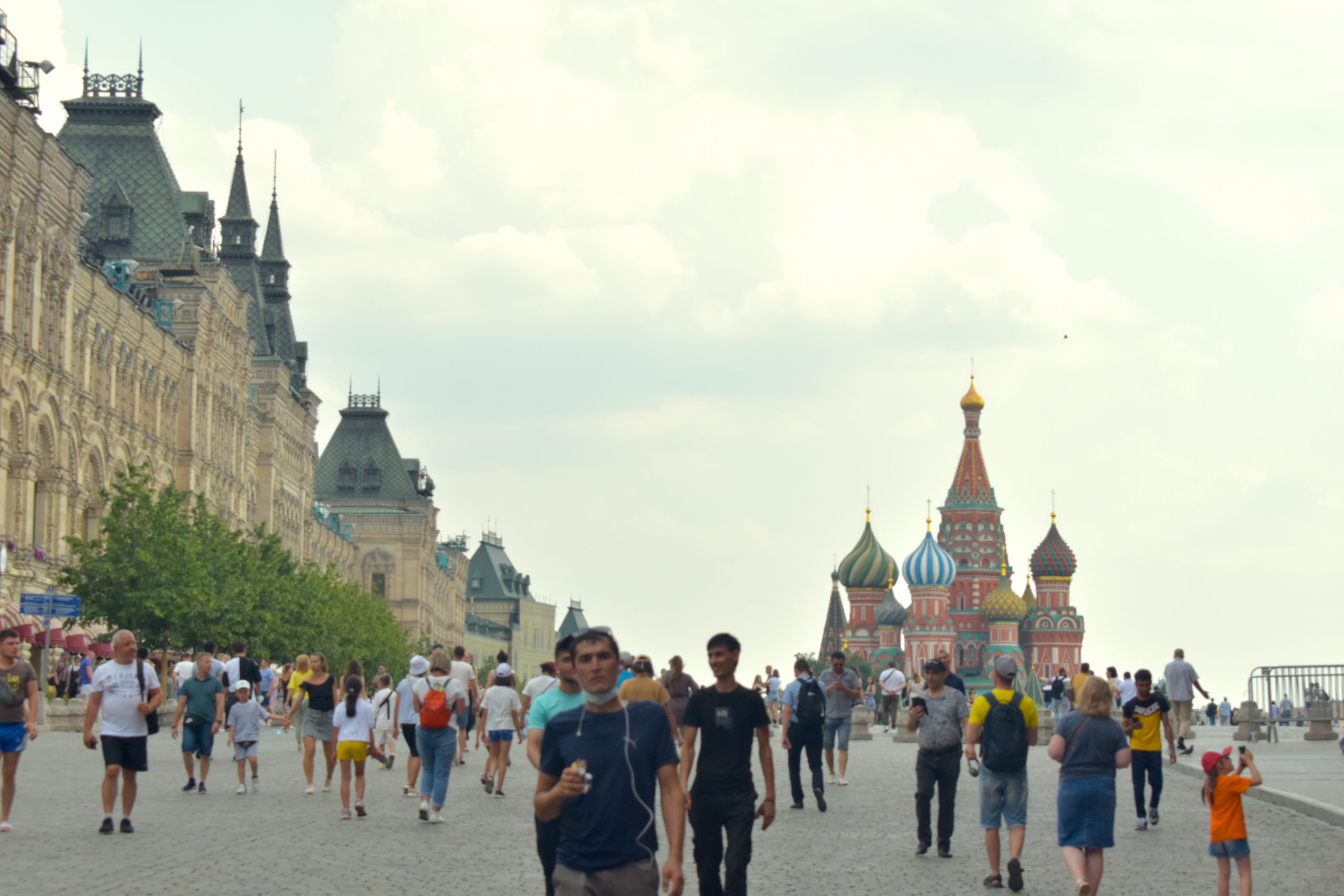 Japarova, however, with her glittering dark Asian eyes and her chubby face wrapped up in hijab does not look Russian at all.

“In my family we pray five times a day,” she says. “To be honest I should be praying and not working now, but I have no room to pray in here,” she looks around the small coffee shop, the overall space of which is not larger than two square meters. That is why now I only pray two times a day – in the morning and in the evening,” Japarova made this concession to her present lifestyle in Russia, but not another one.

“If you put on a headscarf, you can’t take it down to the rest of your life,” she says. “At school in Kyrgyzstan we are not allowed to wear the head covers, and I decided that I would wear one after I finish the middle school.” Japarova says. “I can’t take it off, because of the work, and if they made me, I would have to leave,” she says.

Japarova has finished medical courses back in Kyrgyzstan, and she now is thinking about becoming a nurse. “I adore making injections, infusions, and talking to the patients. However, it is highly doubtful, that she will be allowed to work in hijab in a Russian hospital. Russian state labor laws do not ban the hijabs directly, but in most cases, women are asked to follow the company dress code.

“Migrants in Russia mainly work in construction, small retail businesses. A lot of them work in agriculture, transportation, and taxi,” Abashin says.

One of Muslim Moscow the taxi drives tells his story.

“Now I am working as a taxi driver in Moscow,” Rashid Turdy-Ahunov says. His family emigrated to Russia in 1994 from Tajikistan. His paternal grandparents originated from Urumqi, the capital of Xinjiang Uighur Autonomous Region in China, and they left Urumqi in 1951 because of the persecution of Muslims in China.

“In Tajikistan until now it is impossible to find a workplace in the governmental sector, if you are not an ethnic Tajik,” Turdy-Ahunov says. “There is no future for us in Tajikistan—that is why we are here,” he says.

“My Russian Orthodox friends congratulate me on Muslim holidays, and I congratulate them on Easter,” Turdy-Ahunov praises Russian governmental policy regarding national and religious minorities.

“The state does not proclaim anti-Muslim ideology,” Sergey Abashin says. “Some officials have Islamic background, and even if they are not believers themselves, they belong to Islamic culture,” he says.

“I heard from my friends that some supervisors do not like to hire Muslims,” Turdy-Ahunov says.

“However, we can feel that the high-ranking officials are still very cautious about Islam,” says Abashin, adding “Russian society itself is not homogeneous. That is why when speaking about integration we should understand what social layer or class the migrants are integrated into.”

“I came across that cautious attitude to migrants before,” Turdy-Ahunov says. “Now I am working in comfort taxi class, but economy class was a nightmare for me” he says. “Every day someone was shouting at me.”

For an alternative view watch the video

Turdy-Ahunov says he remembers in Saint-Petersburg that there were lots of skinheads where we used to live at that time.  “As children we were afraid to get back from school.”

Only a small share of migrants enjoy the benefits of the full social integration Abashin says. “Most of the migrants remain undocumented, and they are not included in society,” he says.

“I would say here we are only hired as service workers,” Turdy-Ahunov says. “The executive positions are usually taken by people of Slavic origin.”

“If you have a look at the lists of forbidden literature, more than half of the books are about Islam,” Abashin says.

“There are also some migrants from the countries that are farther away.” Sergey Abashin says. “There is a large community of the labor migrants from Turkey, and there are some communities from Afghanistan and other countries.”

Maryam Shuabna came to Russia from Algeria to study journalism in Moscow. “At first I studied only Russian for a year,” Shuabna says. “It was so difficult,” she says. Her father also graduated from a Russian university.

“Now I am renting a room from an old lady,” Shuabna says. “She is Russian Orthodox. She knows nothing about Islam, but she is very nice to me.”

However, it was not easy for Maryam Shuabna to find such a place. “The first landlady required me to write a request for permission to have a guest at home,” she remembers. Several other property owners Shuabna contacted refused to rent a place to her, when they learnt she was Muslim. “It’s too complicated for them,” Shuabna understands. “It’s easier for them to have someone Russian.”

“It is too complicated for the landlords to lend a room to a foreigner. It is easier for them to have someone Russian.”

Shuabna is now working as a translator from Russian into Arabic, and she dreams of becoming an international journalist covering Arabic countries. She speaks fluent Russian, English, French, and Arabic is her native tongue. “I would probably like to stay and live here,” she says.

“The maximum number of migrants came to Russia in 2013-2014,” says Sergey Abashin, explaining that this figure was fluctuating – falling and rising a little bit. “It is unclear whether this peak will be reached again.”

“A lot of people in Kyrgyzstan speak several foreign languages,” Japarova says. “For example, my brother speaks Arabic, Turkish, and now she is learning English. He is going to travel to America now. He has just received his visa.”

And there is a reason for it – a decade of Muslim separatism left a deep wound in Russian relations with its Muslim neighbourghs.

“At school at first my classmates disliked me,” Turdy-Ahunov remembers. “I think it was due to the Chechen wars and to how their parents viewed Muslims after those wars.”