This year, Greater Boston has taken part in a national trend of increased union growth and activity as a result of pandemic working conditions and widening economic inequality. In Greater Boston, teachers’ unions rally for fair contracts, service workers break union ground, and the new movement is unique in a few ways.

The last two years of the COVID-19 pandemic have been especially difficult for Greater Boston’s working class. For those deemed “essential workers,” the laurels of “thanks” and “God bless” have faded beneath the reality of more demanding working conditions, less stable employment, higher cost of living and unassured health on the job. As a result, the area has joined an unexpected national surge in union activity and growth.

In Greater Boston, that surge has taken the form of the rapidly increasing unionization of the service industry, and the invigoration of public teachers’ unions rallying for fair contracts.

“We saw how quickly these ideas of the essential worker, or the ‘hero,’ were kind of empty slogans,” said Nich Jurvaich, assistant professor of labor history and associate director of the University of Massachusetts, Boston Labor Resource Center. “We called you all heroes, and now we’re back to normal, and actually gonna try to squeeze even more out of you. Even though you’ve lost family members, and you’re trying to sustain other family members who’ve lost their jobs.” 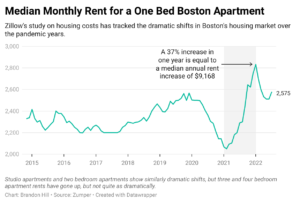 Over the last two years, while the general population has experienced death, stagnation, lockdowns, lay-offs, recession and inflation, America’s billionaires have enjoyed a staggering 35 percent wealth increase, almost $1.2 trillion, since Jan. 1, 2020 when COVID was just beginning to become a household name. The upward transition of wealth has been the largest of the modern era. Jeff Bezos, founder and former president and CEO of Amazon, has seen his fortune alone grow by $86 billion. 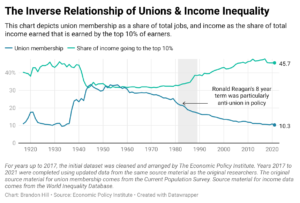 On Dec. 1, a Starbucks coffee shop in Buffalo, NY became the first to succeed in a vote to join Starbucks Workers United. On April 1, it was an Amazon warehouse in Staten Island, NY and another Starbucks in New York City — the 10th vote to pass of 11. Both cited low wages in comparison to their companies’ enormous profits and COVID-related workplace safety concerns among their top reasons for unionizing. The wave did not long stay behind state lines.

Since January, 16 Starbucks locations in Massachusetts have moved to unionize, including several unanimous union victories in Boston. A Trader Joe’s in Hadley, Massachusetts recently passed the company’s first successful union vote earlier this month. The retail store’s employees also cited pandemic protocols like additional sick leave, hazard pay and safety measures that had been withheld or rolled back too soon.

This modern organizing surge of service workers is not being led by experienced national organizers, but by a grassroots effort at a hyper-local level. Trader Joe’s workers seek to form an independent union, not beholden to previously existing national union organizations. The unionization efforts of Starbucks and other coffee shops are being led by generation Z’s entry into the workforce, many of which are still finishing undergraduate degrees.

“My first interest in unionizing was when I heard about the Pavement Coffeehouse chain in Boston doing it,” said Ash O’Neil, a 22-year-old barista-organizer from the freshly unionized Allston Starbucks. “We kept making jokes about unionizing our Starbucks. So then when we saw that Buffalo is doing it, it was like, this is less of a joke now and more of a when should we start talking about it in a more serious way?”

While they expressed that many of their grievances weren’t directed at the store’s direct management but at frequent inconsistency from the top-down, O’Neil also listed many COVID-related concerns. Their coworkers and them also became particularly fired up as they witnessed the corporation’s response to unionization efforts at other stores.

“We had been talking about it a bit at work. Like, ‘did you hear what’s going on in Buffalo? Isn’t it so messed up?” O’Neil said. “All the backlash they were getting from corporate was making us very mad… So we met with a few of the baristas who started the campaign in Buffalo and talked about how do we get in on this? And then the day that Buffalo won their union, we announced our filing.”

In Boston, the treatment of employers towards their freshly unionizing staff isn’t the only catalyst for organizing activity. A surge of action among long-established teachers’ unions across Greater Boston share the unfortunate commonality of facing near-open hostility from school committees in Brookline, Belmont, Malden and elsewhere.

The Brookline Educators Association had been negotiating their contracts for the last three years before a stalemate lead to the decision to strike for a contract resolution. The Belmont Education Association faced a similar stalemate in negotiations that was only resolved by the increased threat of a strike after Brookline’s success. A new superintendent of the Malden School District fired over 100 employees at the start of summer, the final straw in a series of documented grievances leading to a vote of no confidence from the Malden Education Association.

“What is at stake here, is the demoralization that comes from being stalled, and avoided, and talked to death by these municipalities,” said Jessica Wender-Shubow, president of the Brookline Educators Association. “If you believe in workers’ rights and power, you don’t concede.”

In Massachusetts, it’s actually illegal for public sector workers, like teachers, to go on strike due to legislation that passed as a result of a failed 1919 attempt for the Boston Police department to unionize. When leaders in the department were fired for organizing, the remaining officers walked out and were subsequently added to the firing. Riots ensued, the national guard was called in, and the presiding governor of Massachusetts, Calvin Coolidge, was eventually elected president on the publicity of his unrelenting handling of the striking police.

For the Brookline Educators Association, striking was not a decision to be made lightly, but within 24 hours of the strike, their years-long contract dispute was settled.

In many ways, this year’s surge of union growth and activity calls back to the same causes that the early labor movement fought for. The COVID-19 pandemic has increased awareness that the guarantee of a living wage is still yet to be widely achieved, a priority for workplace safety has a long way to go, and the right to organize remains in jeopardy. This time around, the organizers are more diverse and more broadly spread throughout the sectors of the economy. Thus, the modern labor movement fights for a more naturally equitable outcome for ALL workers in America.

“I do think the pandemic shaped, you know, the sort of sense of possibility,” said Juravich. “The sense of, there may be the need to change things, and not just watch all of this kind of get slowly rolled back into another, you know, kind of jobless recovery, ala 2010.”

“If you look at what’s happening with the Amazon and Starbucks movements,” said Wender-Shubow, “you’ll hear it said again, and again, getting that union vote, getting people to choose the ally of allegiance to the union, not the boss, that’s the first challenge.”

“I think what’s really exciting about these new organizing drives, is that they really are grassroots. They’re driven by people,” said Juravich. “Ultimately, I think what we’re seeing is people saying, ‘look, we are in fact organizing ourselves to demand changes to the conditions of our labor right here right now.”

About Brandon Hill 4 Articles
Brandon is a multimedia journalist from Illinois who covers music and entertainment, mental health, labor and culture. He earned his bachelor in journalism degree in print and digital production from the University of Missouri in 2018 and will graduate with his master's degree in multimedia storytelling from Emerson College in the spring of 2023. All of his work can be found at Authory.com/BrandonHill where you can subscribe to a weekly newsletter for all writing and multimedia updates. Check out the "In Search of Sauce Podcast," which highlights the content and quality of contemporary music journalism, anywhere you stream podcasts.