At 67 years old, Patricia Haddad has a lot on her plate. She is speaker pro tempore in the Massachusetts House of Representatives, where she has served as a representative of the 5th Bristol District since 2000. Being speaker pro tempore means she is second in command in the House – an esteemed position in Massachusetts politics, and a position that makes her the highest-ranked female official in the House. But despite all her titles, she is most proud of being a grandmother, which she said often keeps her priorities in check.

“A lot of the things I do, I tend to think, ‘What will my kids or grandkids think of me?’” Haddad said in her spacious third-floor office at the State House. I zoomed in on a picture frame sitting on her desk. It showed Haddad dressed in bright yellow, beaming as she snuggled one grand baby (there are three granddaughters and one grandson so far in the family) against her right cheek. “I want them to be proud of me, you know.” 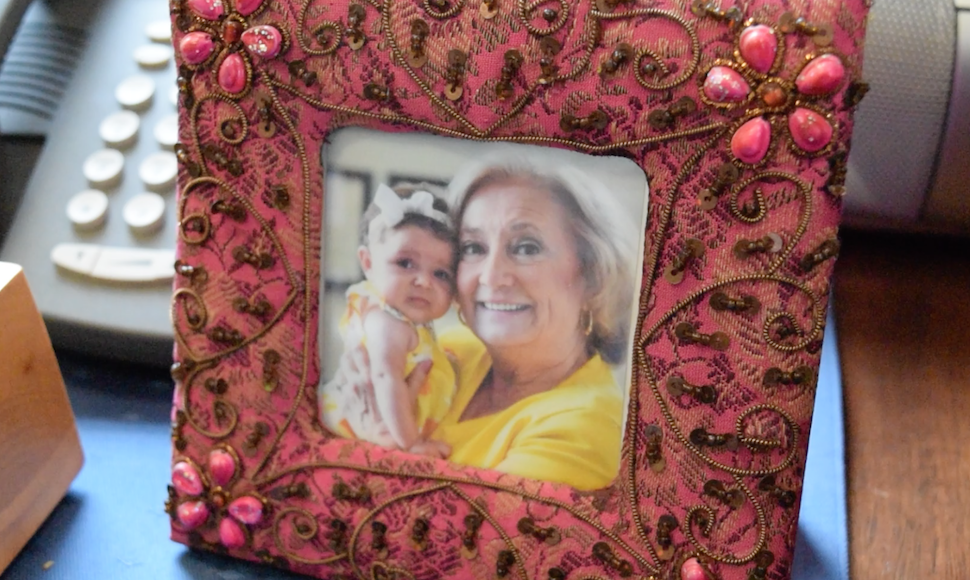 A photo frame of Rep. Haddad with one of her grand babies. 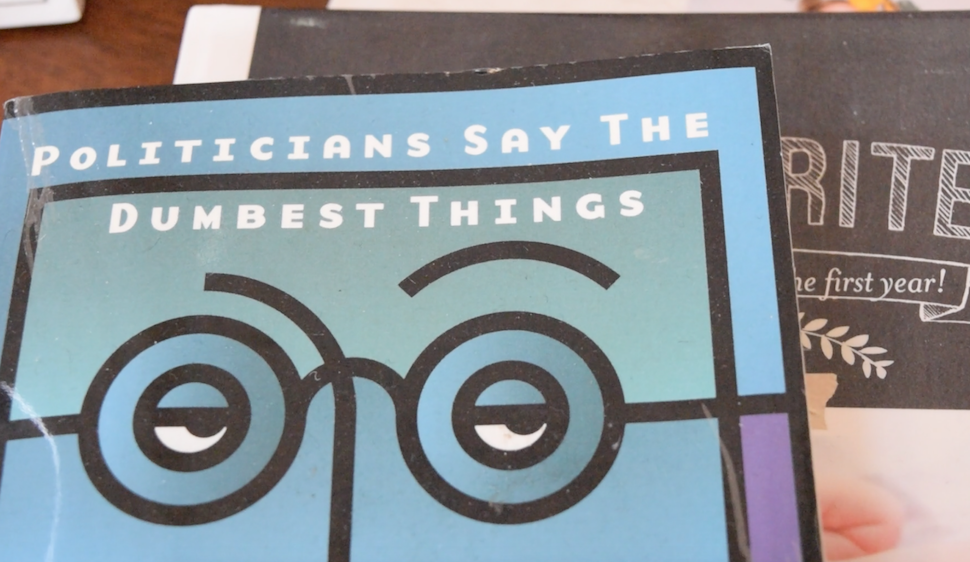 Rep. Haddad has a good sense of humor that shows through the trinkets she keeps around the office, including this politics book. 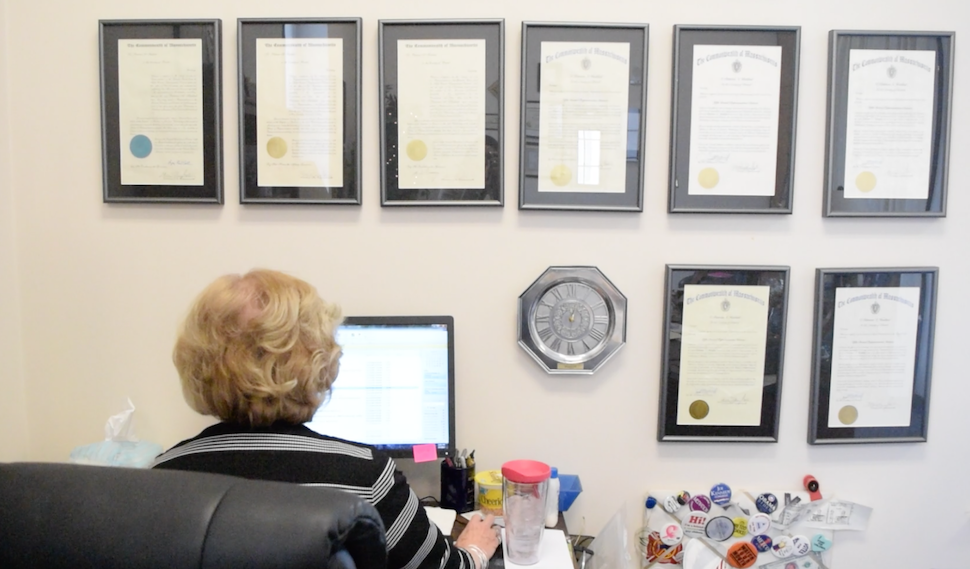 Rows of plaques adorn one wall in her spacious office. 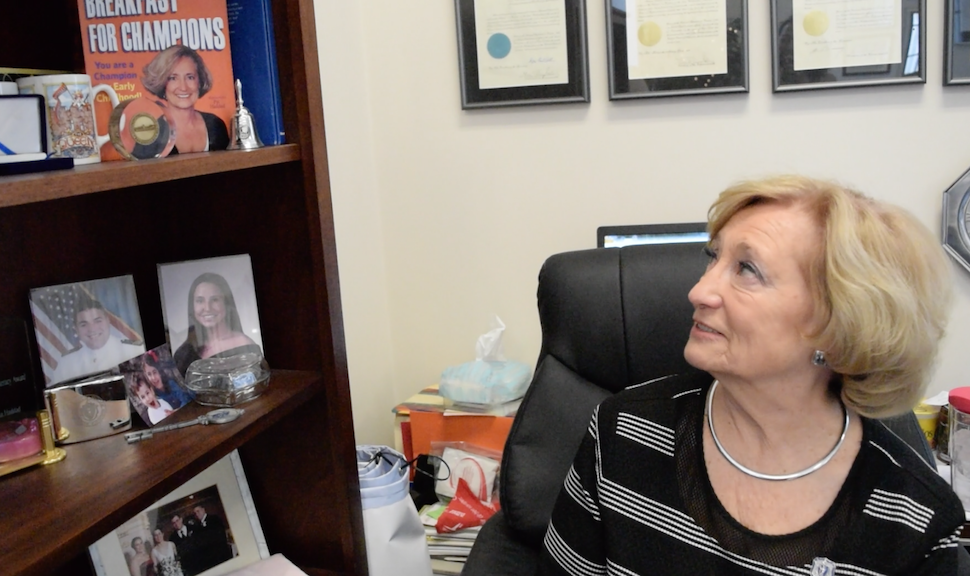 Rep. Haddad tells the story behind the special cereal box with her face on it. 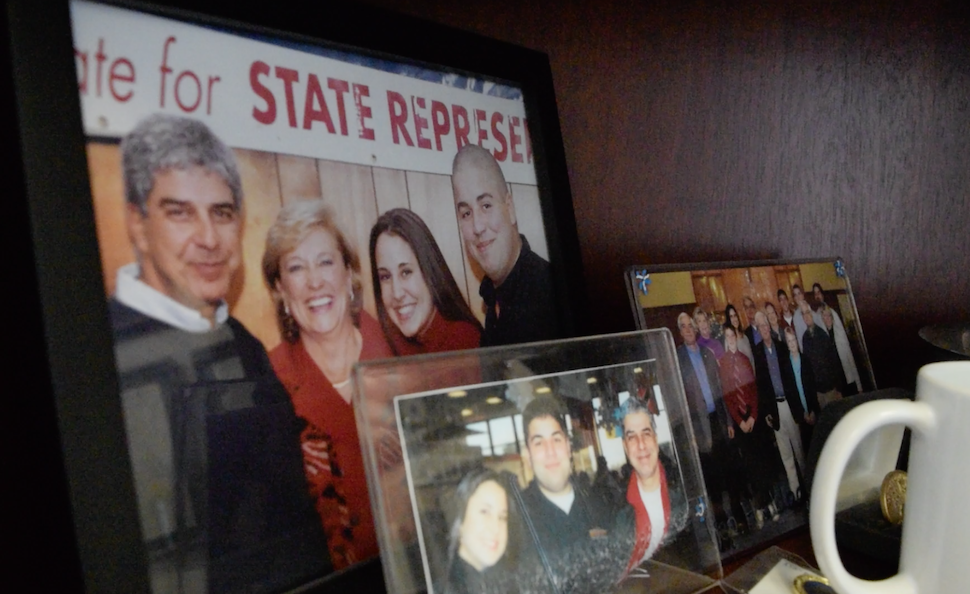 Family photos decorate every corner of the representative's office space.

Looking over her 17 years of service, her grandkids have much to be proud of. She has overseen important issues as part of committees like the Legislative Commission on Public Housing, and the Joint Committee on Education. She has received numerous awards for her public service, including Legislator of the Year Award from the Massachusetts Association of School Committees.

Most importantly, she has led many campaigns for pro-women bills, such as last year’s Pay Equity Bill that bans potential employers from asking women about their salary history. It’s a small legal adjustment, but it gives women a much-needed leg-up in salary negotiations. Massachusetts was the first state to pass such a law and the bill was commemorated during a State House panel in conjunction with Equal Pay Day last April. Women’s issues are among Haddad’s top priorities, but the seasoned lawmaker noted women’s issues should be a concern for all.

“They may be specific to the needs of a woman when it comes to health care, but those needs transcend the female population into a family,” Haddad said. “And I think just about every bill that has had a woman’s focus, has had a male counterpart as co-sponsor. Once given the opportunity, they [male legislators] want to get involved.”

Growing up in her small town of Somerset, where she now presides as district representative, Haddad was used to being “one of the boys.” She was the only girl in a family of four siblings and was never treated special by her parents (when she got in trouble, she recalled, her mother would nickname her ‘Butch’).

For a time she ran a business with her husband in which was a predominantly male field. And during her tenure as a middle school health education teacher, she also coached – another role traditionally held by men. As a representative who has weathered New England’s “Old Boys Club” with grace, Haddad said she is well versed in the gender barriers women face. However, she tries not to dwell on it.

All the Way Up

Before her deep dive into politics, Haddad taught physical health and education as a middle school teacher. Her tough yet personable exterior and her passion for the well-being of her community eventually led to her first campaign for the Somerset school committee in 1993. But even after serving on the committee for eight years, Haddad said she wanted to accomplish more. She started to entertain the idea of running for public office after she helped a good friend, who held the representative position before her, campaign for State Senate.

Since that meant there was a seat in the House of Representatives open for grabs, Haddad said she felt it was her chance to take the next step in her public service. She was up against three other candidates vying for the position – two Republicans, one Democrat, all men. That only fueled her fire to win. She felt a responsibility to “keep the door open for women” as her friend did.

“I really felt that she had paved the way and I had to retain that, because there are many fewer women than there are men. So I felt responsible for everything she had done to continue it,” Haddad said.

And she did. After getting through to the primaries, Haddad went on to win the race and, in 2001, officially started to serve in the House.

Haddad continues to pave the way for more women to climb up the ladder, especially in local government. Despite the challenges of being in a field where female leaders are still scarce, she believes times are changing. She observed that more women elected officials are stepping up to bolder roles in the Massachusetts State House.

Haddad said she also sees more equal partnerships form among younger couples, including between her own son and his wife. Her son, she said, was taught to appreciate and respect what women bring to the table. Raising the younger generation, both boys and girls, to regard each other as equals is important for the advancement of women.

“We have an obligation to the next generation to make changes,” she said. “So far they’ve only been incremental, but if we really took this seriously then maybe it would go faster.” 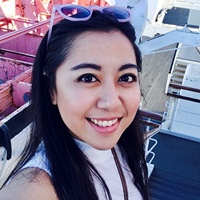